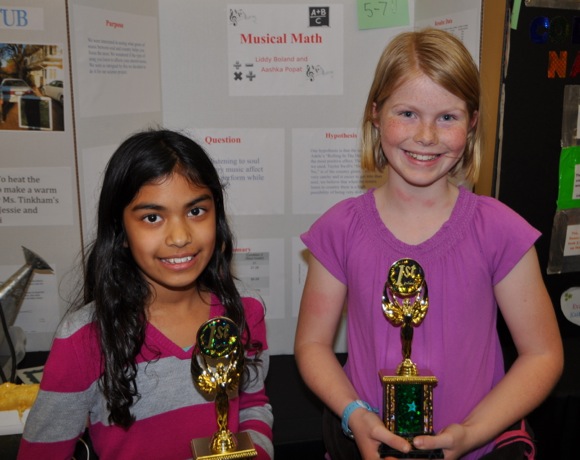 What music genre do you think would help you focus more — country or soul? That’s the question La Entrada 5th graders Liddy and Aashka posed for the project they entered into the school’s annual science fair. When judging was completed last Thursday, they were awarded first prize in their grade level.

Their hunch, aka hypothesis, was that soul – in particular Adele’s Rolling in the Deep – would have a more positive affect on attentiveness. Using Taylor Swift’s Should’ve Said No, they conceded that while country is easier to get into, it’s also more likely that listeners will be distracted.

After testing participants with a one minute clip from each song, they looked at results. It was soul that produced the most distraction and country that helped with attentiveness, although they were close. “We do not think that the genre matters but if the song is appealing and catchy, then it will prove to be more distracting,” the pair wrote in their conclusion.

Liddy and Aashka were two of the 139 students that showcased 81 projects at this year’s fair. We think the project names themselves are creative, so we have listed a few here: “Measuring sweetness in drinks using an iPod and sunglasses”, “Musical math, or how different kinds of music influence performance on math tests” (Liddy and Aashka’s project), “Does chewing gum influence your heart rate?”, “Carved pumpkin preservation treatments.”

Wonderful news! I am so proud of their effort and perseverance!