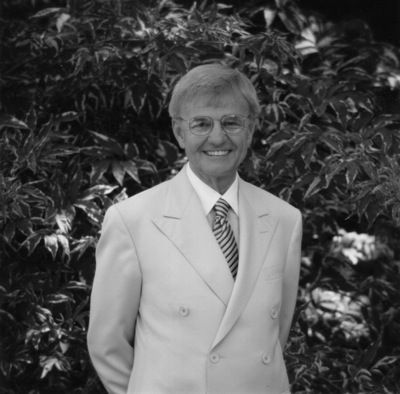 The hills and playing fields of Ladera are missing one of their greatest fans today. Longtime resident Dr. Rolf Georg Spamer passed away in his beloved Ladera home on January 17, 2012, surrounded by the family he so cherished. He is survived by his wife, Betty, and their combined family of six children: Brynn Spamer Williams, Kristin Spamer Miller, Jenny Spamer Harris, Jason Hubbard, Sarah Hubbard Foley, and Neal Hubbard. He is preceded in death by his first wife, Carol, who passed away in 1996. He is also survived by brother Ronald Spamer and sister Marianne Spamer.

His life will be celebrated at a memorial service on Saturday, Feb. 11 at 3:00 pm at Ladera Community Church (3300 Alpine Rd). The family requests that in lieu of flowers, donations in Rolf’s memory be made to the Ladera Church Youth Music Program.

Dr. Spamer is greatly missed by the 17 grandchildren who loved and laughed with him for so many years. He could be counted on to join them in shooting hoops, playing board games, camping at Bass Lake and cheering on favorite sports teams. In all they did, his grandchildren had a devoted fan in Grandpa Rolf. It is this special connection with children and family that so marked his life.

Born in 1935, Rolf Spamer grew up in Chicago where he took special pride in his prowess on the basketball court at Hinsdale High. After undergraduate studies at U. of Illinois, Rolf went on to dental school and ROTC at Northwestern University. In 1959, the newly minted Dr. Spamer married Carol Trevillian and shortly thereafter served as a Naval officer in San Diego. At the University of Washington, Rolf earned a specialized degree in pediatric dentistry, the work to which he devoted himself until just the last few months of his life. In 1965, the Spamers moved to their home on La Mesa Drive where Rolf would enjoy the Ladera life for the rest of his days.

Among pediatric dentists, Dr. Spamer is remembered for his expertise and generosity. He served as a president of the California Society of Pediatric Dentists, readily sharing his enthusiasm and knowledge with new colleagues. After first practicing in Menlo Park, Dr. Spamer spent more than 46 years treating children in his Hayward office.  He was often sought out to help children with special needs, and to handle challenging cases requiring sedation. Long before it was commonplace, Dr. Spamer’s offices were designed to welcome and reassure his young patients.

Around Ladera, his children’s friends and classmates knew Rolf not only as Dr. Spamer, but also as a coach, an umpire, and an all-around fun, active dad. A lifelong sportsman himself, Rolf spent many years coaching softball teams, always quick with a smile and encouraging words for even the greenest players. He also spent many years on local baseball diamonds, serving as umpire for little league baseball. He could always be trusted to bring knowledge, fairness and a love of kids to the playing field.

Laderans will also remember Rolf as an active member of Ladera Community Church. He enjoyed more than 40 years of fellowship with the LCC congregation, serving in many lay leadership roles and on the preschool board. Rolf was a fixture at the LCC annual Bass Lake retreat, camping there with the Spamer clan for more years than anyone can remember. In the wider community, Rolf brought his compassion to service in the KARA organization as a grief counselor, and served in the Hayward Rotary for many years.

In 1999, Rolf married fellow Laderan Betty Hubbard, embracing the newly expanded brood of grandchildren they shared. Always game for fun and new adventures, Rolf spent his next years enjoying everything from golf to opera. At the same time, he always cherished the perennial gifts of life in Ladera: walks with his dog, Huckleberry; the green hills of Webb Ranch in spring; volleyball and hot dogs at the pool on the 4th of July.

Rolf was a dear, gentle person, and he will be greatly missed, both on his walks in Ladera, at the Konditorei Cafe, and at Ladera Community Church.
He had many gifts that he shared with others: he was the “go-to” guy on KARA, and I know all of his own KARA connections benefited from his personal guidance in their troubled times.

Dr. Rolf Spamer will always be missed. He was my Dentist that took good care of my teeth. When I was young he would always tell me not to eat to much candy because of cavities. He was such a great Dentist and that brought a smile to a face. I will always remember him and forever be missed.

Rolf was a fine friend and colleague when we shared 15 years teaching pediatric dentistry together at the University of California School of Dentistry. We would sometimes travel out of town together to offer postgraduate courses around the state. I remember Rolf’s careful attention to detail and what a good listener and spiritual man he was.