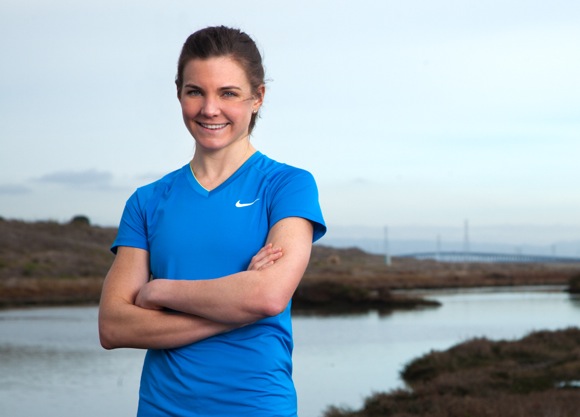 As a freshman at Stanford, Ashley Carroll used to run around Menlo Park whenever she felt homesick. “I’d go over the San Mateo Dr. bike bridge and run around the Allied Arts neighborhood,” she recalls. “It was so full of family smells — and so comforting.”

While at Stanford, Ashley competed on the track team as a heptathlete. It was after graduation that she turned to distance running. She competed in the Olympic Trials Marathon in Houston on January 14, finishing in the middle of the pack with a time of two hours, 44 minutes and 29 seconds.

“Initially, distance running for me was a healthy, social outlet,” she says. “Now it’s grown into an additional dimension in which I can find balance in my life. I tend to set pretty hard goals for myself both personally and professionally.” 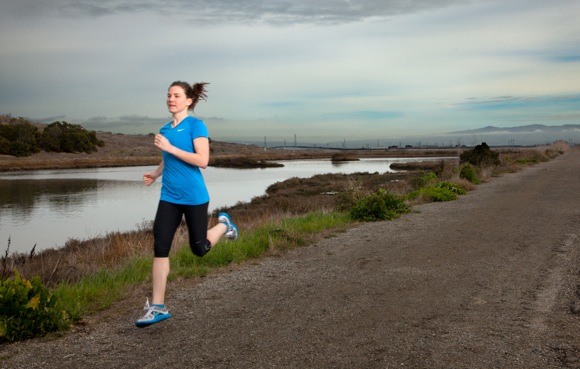 Ashley, who’s lived in Menlo Park for the past five years, considered the Olympic Trials out of reach. “You have to run under two hours 46 minutes to qualify, which is about 6.19 per mile,” she says. “I thought attaining that was too lofty of a goal, given work and other obligations.” (Ashley is a product manager at SurveyMonkey and is engaged to be married.)

But, everything started falling into place for her around Halloween, and she decided to go for it, putting post-it notes around her work place and home saying “two hours, 46 minutes.”

She did qualify, chopping 10 minutes off her previous time during the December California International Marathon, posting a time of 2:44:07. The late qualification gave her only six weeks to train for the Trials. She placed 72nd out of a 152-runner field.

“I hope to compete again in four years,” she says. “Female distance runners peak in their mid to late thirties.”

28 year-old Ashley competes as part of the San Francisco-based Impala Racing Team, which she characterizes as a “great group of women.”

“Right now, I’m taking it easy and getting back into running conservatively,” she says. “I’ll probably do a little racing in 5Ks in the spring and summer. My big goal for 2012 is to have a solid cross country season in the fall.”