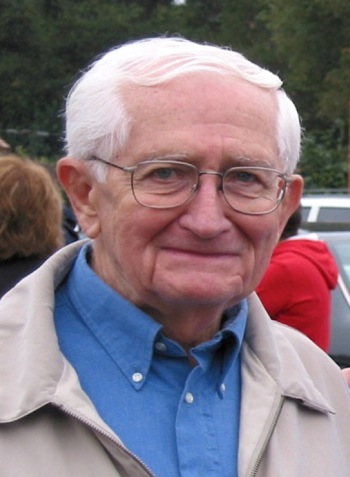 Howard M. Daschbach, Jr. died peacefully in Atherton, CA on February 9, 2012, at the age of 87 after a long battle with Parkinson’s disease.

He is also survived by his sister, Jeanne Miller of San Francisco and sister-in-law, Joan Daschbach, of San Mateo. Howard will be greatly missed by his caregivers Lose and Betty.

Howard was born in Pittsburgh, PA, and it was in that city that he graduated from Central District Catholic High School and Duquesne University. A proud member of the Armed Forces, Howard served in the Army during World War II in Europe, the Philippines, and Japan.

In 1947, Howard moved to California to attend Stanford University Law School. It was during law school that he met Leonore, the love of his life. Upon graduation as a member the class of 1950, Howard established his law practice in Menlo Park, and for the next 43 years he provided counsel to countless individuals and families who entrusted to him their most important and sensitive legal
matters.

Sustained by faith, love of family and passion for tennis, dominoes and the Giants

A man of deep faith, Howard was a 57-year parishioner and daily communicant at St. Raymond Church in Menlo Park. He was never without the Magnifcat and those in need were always in his prayers. He frequently brought Holy Communion to those who were unable to attend Mass due to physical infirmities. In 1982, Howard was installed as a Knight of the Order of Malta, one of the most ancient of the Catholic orders.

Howard was a longtime member of the Serra Club of Palo Alto–Menlo Park and the Menlo Circus Club. It was at the Circus Club with the Kennedy-Reynolds group from Palo Alto, that Howard played tennis until his health rendered him unable to play his favorite sport. He was a founding member of The Common Sense Club, and enjoyed meeting with friends at Le Boulanger in Menlo Park following morning Mass.

Although they brought him equal parts agony and ecstasy, Howard was a San Francisco Giants fan until the end. Whether by radio or TV, he rarely missed a game. It was only fitting that Howard saw the Giants win the 2010 World Series having lived nearly 50 years replaying in his memory Bobby Richardson’s catch of Willie McCovey’s line drive that would have made the Giants World Champions in 1962.

Howard was perhaps happiest with domino tiles in his hands and one of his children, or later his grandchildren, sitting across from him at the kitchen table or on the deck of the Tahoe vacation home doing their utmost to best the crafty veteran. Generations of family members will refer to the 2/3 domino as the “idiot’s delight” as coined by Howard. He reminded those taking too much time planning their next play that the game is played “by the clock and not the calendar”.

Let’s just say that in dominos, like in life, Howard usually had the last laugh. All who knew him will forever remember how he loved to laugh. He was beloved, and will be missed, by all whose lives he brightened.

In lieu of flowers his family suggests that those who wish to honor Howard’s memory consider contributions to their favorite charity or some of the organizations closest to his heart: St. Raymond School, the Oakwood Retirement Home of the Religious of the Sacred Heart, The Order of Malta, or Smile Train.

A magnificent and revealing testimonial to a superlative man by a most loving daughter, Laura! Thank you, Laura, for celebrating in this way one of God’s most amazing sons–a great dad, granddad and great granddad. I feel I know now in a new way a person whose smile I have received so often over the few years I have lived in this area. You and your mother, as well as your sisters and brothers, have sustained two huge losses in recent months. May your father, now all-powerful with God, console you and strengthen you as you face the future.

The whole, wonderful Daschbach Family are in my prayers at this time. We are celebrating Howard today at our 5:15 pm Mass. It seems appropriate that we do so on Valentine’s Day because he was a man of great heart and compassion. How he loved each one of you! I remember sitting with him as he showed me pictures he had received during the Christmas season. He was so proud of his family. I know he is in our God’s loving hands now. May he rest in peace. Bunny Flick RSCJ

I am so sorry for your loss. As children, my father regaled us with stories of your father and their days as young men at Central Catholic and Duquesne. I was fortunate enough to visit with your dad and mom several times in Atherton and really, really enjoyed the time spent with them. It was then that I learned first hand what a wonderful and kind and funny man your father was. I remember the time he took my parents on a drive in the hills outside San Francisco. He pointed to the fields and said “And this is where all the young avocados are from, reared in this hills by their loving parents.” My parents stared blanking out the window, looking for the Avocado family’s house. Apparently guacamole and avocados had not yet crossed the Rockies and made their way to Pittsburgh. He so enjoyed telling me that story over and over…perhaps as much to remind him how far he had traveled to build a new life in San Francisco.

Our prayers are with you and your mother.

First, I am sorry for your great losses. May the Peace of of the Lord bring you comfort.
I met Howard and his Dad, the Sheriff, in the late 1970s when, as Chairman of the Federal Maritime Commission, I spoke at a luncheon meeting of a trade club in SF.
Your Howard brought the Sheriff to meet me. As I recall the latter was the traffic manager for Bethlehem or U.S. Steel in SF. At that time, Howard gave me a six page record of the Daschbach family in the USA. That led me to visit Ferdinand, Indiana, the gravesite of Jacob.
Peace and health to you and your family,
Richard

My father, Joseph was born in P’burgh.