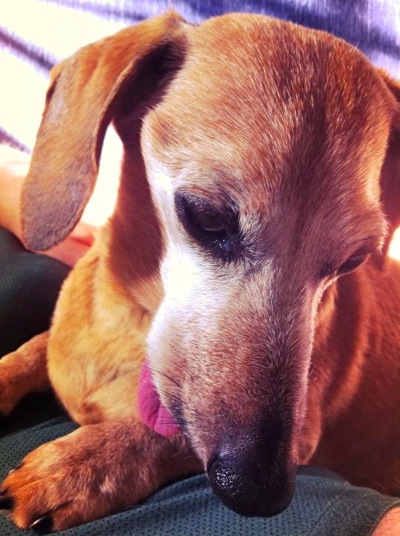 Soon after getting married in 2009, Charlotte Carnevale and Dave Willner added another family member, a dachshund that they adopted through the organization Muttville Senior Dog Rescue. Three years later, the dog has his own Facebook page and over 1,000 followers, not to mention a new companion, another rescue dachshund named Junebug.

“We knew we wanted a calm, house-trained dog, and Ernie has fit the bill precisely,” says Charlotte. “But, we had no idea that we’d also be getting a dog with such personality! His full name is Mr. Harold Ernest Bones because his foster name was Harry, my husband wanted to call him Ernie, and I wanted to call him Mr. Bones. He had to have most of his teeth removed due to prior neglect, and it reminded me of the vaudeville song in the movie White Christmas where they sing about a toothless dog.”

“We set Ernie up with a Facebook page because my mother is his biggest fan and wanted an easy way to see pictures. My husband and I also both work for Facebook, so it felt like a good use of the product, too. Ernie has fans from all over the world!” 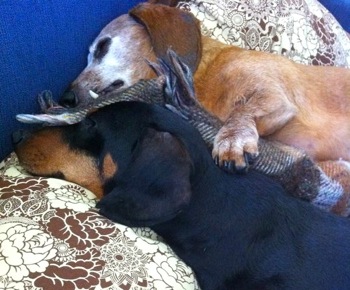 Charlotte, who grew up in Menlo Park, and Dave recently bought a home near downtown Menlo. “All of our new neighbors are really enjoying Ernie’s antics — he’s a very funny guy with lots of attitude,” Charlotte says. “And, living so close to downtown is like a reintroduction to where I grew up. Now that Facebook is in Menlo Park, lots of our Facebook friends come over because they want to check out what’s going on downtown.”

In addition to adjusting to new home surroundings, Ernie is adjusting to Junebug, who is about four years old. “We were told that dachshunds do well in pairs,” says Charlotte. “She is keeping us all on our toes as she’s younger and not as calm as Ernie.”

About both Muttville Senior Dog Rescue and Ernie, Charlotte couldn’t be more enthusiastic: “By going through Muttville, we knew what we were getting. And, Ernie is a fantastic dog. He’s so worthy of even a few years of companionship.”

Footnote about Muttville: Emails Patty Stanton, who volunteers for the organization: “Muttville Senior Dog Rescue was founded in San Francisco by Sherri Franklin four years ago when she started taking older dogs home from the SF SPCA who were unlikely to be adopted. We’re always looking for more foster homes, forever homes, volunteers, and donors. There are about 50-60 dogs available at any given time, and 1,200 have been rescued to date, almost a dog a day.”