by Diane Rezendes Khirallah on February 25, 2012 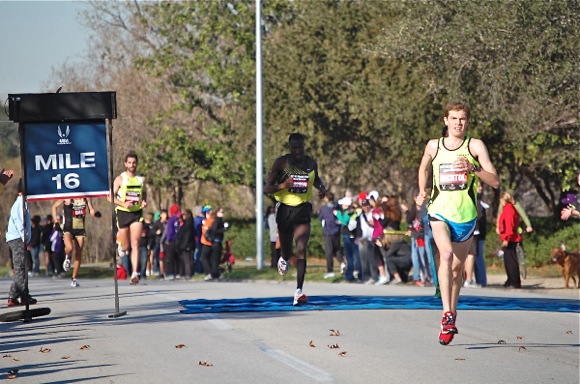 Ph.D. candidate Keith Bechtol, who’s been researching gamma-ray astronomy at SLAC and doing educational outreach as a public tour guide at the Menlo Park facility, is just as committed to his running, though if you asked, he would tell you without hesitation that being a scientist trumps being a marathoner every time.

Well, almost.  Bechtol competed in the U.S. Olympic trials in Houston, running a strong 2:16:02. Unfortunately, it was not strong enough to secure one of the three slots on the U.S. team — but a little context puts it into perspective. The top four finishers completed the 26-mile course in under 2:10:00, a first in the history of Olympic trials.

Bechtol came to the attention of local press and the running community nationwide when he won the San Francisco Marathon — his first-ever marathon — in July 2010. His time of 2:23:28 smashed the old course record by two minutes, and spurred him to think more seriously about his running. He realized he was only four minutes away from the 2:19 standard needed to qualify for the Olympic trials.

He would have to train rigorously — and he learned tough lessons from going out too fast, too early in the Chicago and Los Angeles marathons. “The goal was too big for my body,” he said. “I crashed and burned.” Lesson learned, he adjusted his training for Grandma’s Marathon in Duluth last June. He finished in 2:16:44, handily qualifying for the trials in Houston.

He recalls Houston: “The pace of the leaders was extremely fast.” It would be easy to get caught up in the momentum. But as any runner can attest, that way lies disaster. So he backed off. He was 70th after the first mile and 66th at 13 miles.

“I told myself to be patient, and let the group I had been running with go ahead,” Bechtol said. A smart move: In the second half of the race, he overtook many people who went out fast at the start, and were now off their pace. “It was mentally tough to hold back,” earlier in the race, he explained “but fun to catch up.”

In the end, Bechtol finished 27th in a field of 112 elite runners, and he was rewarded with the chance to meet runners he’s followed for years. “Seeing my running heroes, legends like Joan Benoit Samuelson and Frank Shorter, in the elevator — it’s unbelievable,” he said. “In person, most of the runners are very relaxed and easy-going. We have a lot in common because of our running.”

When he’s working out at race speed, Bechtol focuses on the fine points of training. But when he’s logging miles, he’s likely to think about science problems. “I’m more creative. It’s almost like dreaming and you wake up with an idea — when you go to work, you implement it,” he said. “Running is the creative phase; work is figuring out the details.”

And sometimes he “just tunes out. I don’t really think about anything. I just run.”

He sees other similarities between science and marathoning. Much of the work is behind the scenes. “It’s grungy, it’s details, it’s not particularly exciting or glamorous viewed from the outside. Often, it’s just putting in the miles,” he said of running. “Research can be like that: At the end of the day, I got a program to compile, and that was a successful day… It takes patience, day-to-day grinding and consistency.”

After he finishes his Ph.D., he and his wife, Ellen, move to Chicago, where he will begin a research fellowship at the Kavli Institute for Cosmological Physics.

And the Olympics? Bechtol, who turned 27 this month, takes a marathoner’s long-range view: His eye is on 2016. Unlike many Olympic sports whose athletes peak young, it’s not unusual for long-distance runners to post their fastest times in their 30s. “I’ll be 30 in the next cycle,” he said. “All the support from friends at SLAC and Stanford has been tremendous. I didn’t expect to have opportunities like this after college, but they understood my goals and helped clear the path for me.”