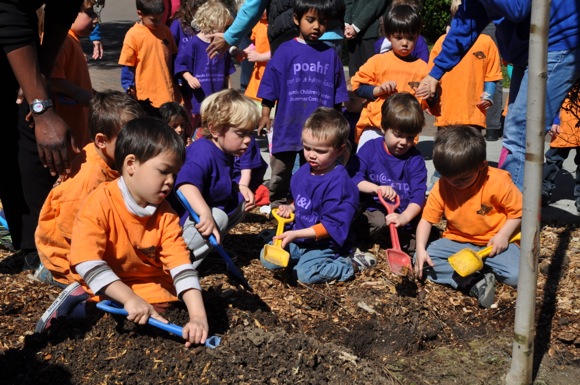 The heavy lifting had already been done — Menlo’s newest tree was already in the ground — but it was the smiles and earnestness of preschoolers from the Menlo Park Children’s Center that provided the sparkle at today’s Arbor Day celebration.

The participants diligently shoveled dirt around the tree’s perimeter, joined at one point by Menlo Park Mayor Kirsten Keith (pictured below right). Donated by the Menlo Park Live Oaks Lions Club, the tree, a red maple, is situated near the Menlo Park Library. 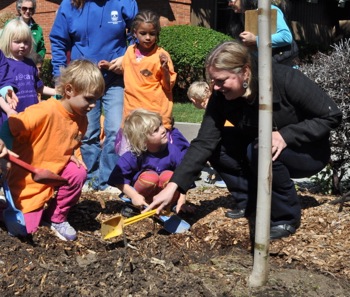 Given that Menlo Park is designated as a “Tree City,” the almost annual local celebration makes sense. Due to different climate conditions that affect planting, Arbor Day occurs anywhere from January through May across the U.S. The designation for California is March 7 to 14.

Nebraskan J. Sterling Morton is credited with founding Arbor Day in 1872. He was a journalist who advocated tree planting by individuals and groups. In his view, trees not only provided beauty but acted a windbreaks to keep soil in place and could be used as fuel and for building. Morton’s vision for a special day spread, and the tradition took root in schools nationwide in 1882.

To bring Arbor Day into the 21st century and give the children some context, Environmental Quality Commission chair Mitch Slomiak read passages of The Lorax, the Dr. Seuss book that chronicles the plight of the environment and the Lorax, who speaks for trees against the greedy Once-ler. Some of the children may have already seen the movie, a box office hit currently in theaters.