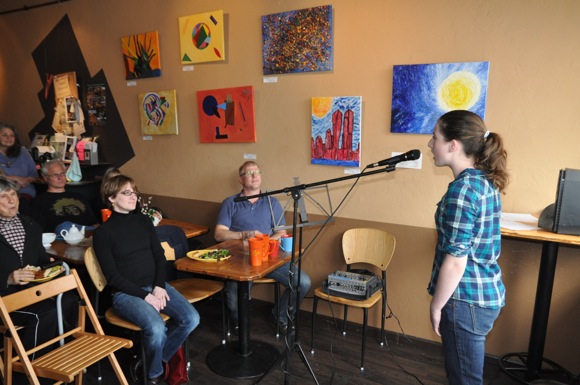 A series of performers sung out for literacy today at a Project Read Menlo Park fundraiser held at Cafe Zoe this afternoon. Fifty percent of the proceeds from food and beverage sales at the Cafe were being donated to Project Read.

Among the singers was Menlo Park resident Hannah Steuer (pictured above), a sixth grader at Gideon Hausner School, who was performing solo for the first time, singing Jar of Hearts. Hannah started choir when she was in third grade and she’s also taking voice lessons. “I really like to sing,” she says. “The songs I like to sing relate to me in some way. I can sing how I feel easier than I can talk about it” 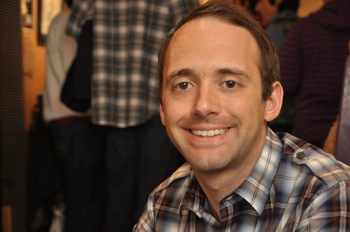 Tim Grow (right), who is head of the Board of Directors of Literacy Partners, which was formed about two years ago with the sole purpose of supporting Project Read Menlo Park, said another hoped outcome of today’s event was to raise awareness not only about the work of the local organization but to also build bridges with other Bay Area groups involved with literacy efforts. “We want to get a better understanding of where our program is making an impact as well as learn what other groups are doing to avoid duplication.” Tim, who is a product manager at Google, got involved with Literacy Partners through Volunteer Match.

Literacy Partners Board member Kristi Breisch was pleased with the turnout for the event. “Not being able to read is difficult anywhere, but it is particularly challenging for people here in the Bay Area,” she said.

In addition to the 50% proceeds from Cafe sales, a silent auction was also held. One challenge being faced by Project Read Menlo Park is that funding from the state has been eliminated.