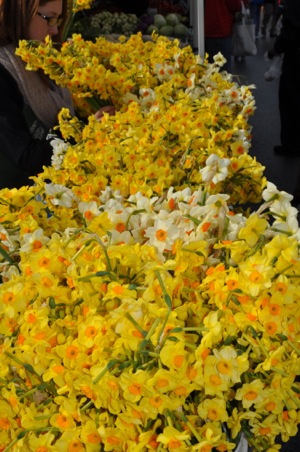 You can almost hear the excitement in InMenlo rainfall watcher Bill Russ’s report: “While we were sleeping, .9″ fell, bringing my season-to-date total to 8.4″. This is the best drop of the seasonal rain year, and we now exceed my lowest total of the last 17 years, which was 8.2”. Thank you, Lord!

Late morning skies alternated between cloudy and patches of sunshine. During a sunny period, we caught Bill the Bulb Baron’s narcissus in their perpetually cheery state.