Menlo School students get a taste of Music@Menlo

During the summer, Music@Menlo is about the Festival’s concerts and the Chamber Music Institute’s programs for young professional musicians and gifted young musicians. While many of the events and performances happen at Menlo School, Menlo students aren’t on campus. That changed this past week when Music@Menlo came to them for its Winter Residency Program.

The five performing musicians who visited the campus are all Chamber Music Institute alumni. They were there for a series of special performances, discussions, and classroom presentations designed to introduce Menlo School students to a broad selection of chamber music masterpieces. We stopped in yesterday morning when the topic was music and world religions. 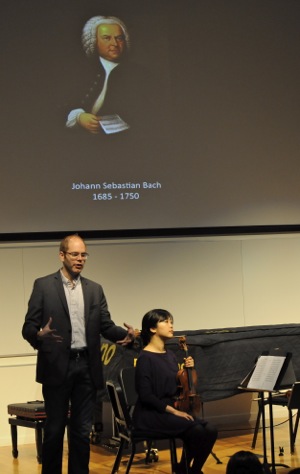 Music@Menlo Artistic Administrator Isaac Thompson (pictured standing, right) reminded the assembled students that during the 14th and 15th century, people got their information from learned church people, and until the 20th century, there was a palpable connection between music, spirituality and religion.

After hearing selections from Bach and Hayden that showcased that connection, the focus turned to 20th century composers Igor Stravinsky and Dmitri Shostakovich. “The need to write music was still there,” said Thompson, “but the motivations were different. Composers wrote about what was happening in the world”

We talked to two 9th graders who attended Monday’s class. “I found it very interesting, and it helped bring history alive,” said Rebecca Shoch. “It made the events we’re reading about much more realistic.”

Added Liz Simonovich: “I really got a new perspective. I’m a Christian and hadn’t heard this music before.” (Note: while the class is World Religions, the students are currently studying Christianity.)

Thompson said that by the time the Winter Residency comes to a close today, almost all of Menlo’s upper school students will have participated in the presentations and discussions.

“The core to extending classical music into the future is to assure that there will be an audience to listen,” said Music@Menlo Executive Director Edward Sweeney. “By introducing these students to meaningful chamber music, our hope is that at some point in the future, it will prompt them to attend a concert or get involved with music in some other way.”

Music@Menlo’s 10th anniversary festival season will take place this year from July 20 to August 11. Tickets go on sale in April.