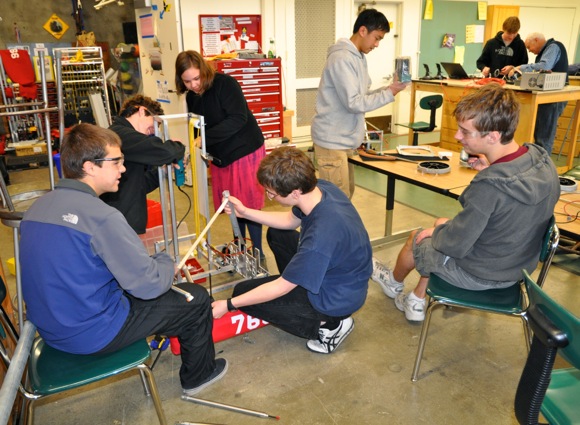 Post competition update on March 31 from parent Susan Bryan: “TOTALLY AMAZING! Team 766 came from behind to be in the final winning alliance of three!” Next step for the M-A Bears is a trip to the national competition in St. Louis.

Two weeks ago, Robotics Team 766 from Menlo-Atherton High School was competing in Davis, CA. They’d “bagged and tagged” their entry robot almost a month earlier, sending it off to the competition site where they wouldn’t see it again until right before the competition.

“It was a rough competition, and we had to fix a lot of problems on the fly,” said Zoe Nuyens, a junior who’s been on the team for three years. “But we got the shooter functioning and the pneumatics systems working just in time.” (One of the M-A robot’s tasks is to shoot baskets.)

Robotics competition is complicated. Explained in the most simplistic way, there are qualifying matches that create ranking systems from which team alliances are formed.

“This year for the first time the team had enough budget to build a twin robot to the one they shipped for seclusion,” said parent Susan Bryan, whose son Johnathan is on the team.  “It’s not cheating. Many other first-rate teams do this. But having Abbott as a sponsor made this possible for M-A this year. One of the team’s mentors, Kelley McCrystal, works at Abbott and got ‘budget’ to spend in the company’s machine shop.” 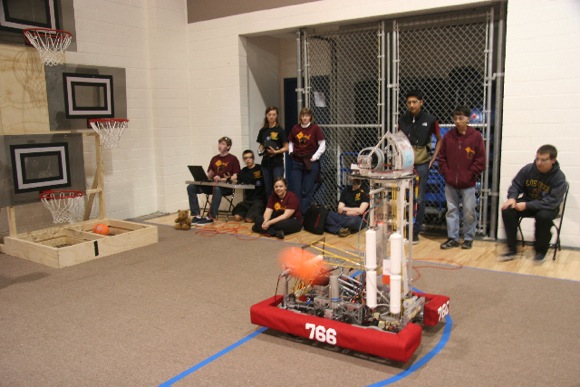 The M-A Bears have been participating in the FIRST Robotics Competition (FRC) since 2003. As part of FRC, the M-A team, which currently has about 30 students supported by teacher Jeff DeCurtins, builds a 120-pound robot in six weeks starting in January. In addition to competing, Team 766 travels to elementary and middle schools to show younger kids “the magic of science and technology.”

“For team members, robotics provides a great opportunity to learn about technology and engineering, but also provides an opportunity simply to be involved in something hands-on and team-oriented,” explains the team statement. “The skills gained from robotics are applicable to the job world and simply life in general. There are many ways to be involved: designing the robot, physically building it, electronics, programming, web-design, outreach.”

The FIRST Silicon Valley Regionals take place at the San Jose State University Event Center from starting today through March 31. Zoe explained that there are practice rounds and inspections on Thursday, followed by qualifying matches on Friday and elimination rounds on Saturday. 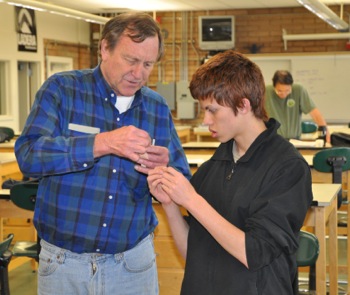 “Unlike some other high school teams, our team has always been student run,” said Zoe. “That’s been true even more so this year.”

Parent Susan Bryan saw the student’s teamwork pay off at Davis: “The kids worked diligently to get the shooter working. They didn’t get angry or blame each either, but went on problem-solving in good engineering tradition. They finally got it to shoot successfully on the practice field.”

While some mentors are parents, most, like Kelley, are not. Terry Lawrence (pictured above), who graduated from M-A long before there was a robotic team, found himself an unemployed engineer looking for a way to contribute; he’s enjoyed his first year as a mentor.

Katharine Altemus is another first year mentor. “I was trained as a neuro-scientist and am now a patent attorney,” she said. “It’s long been on my bucket list to build a robot. It’s been great getting to know the kids and their parents.”

At the San Jose regional, Team 766 was one of the champions, along with Team 254, Bellarmine, and Team 971, Mountain View. We’re now headed to World Championships in St. Louis.