Female Facebook engineers reach out to potential engineers of the future 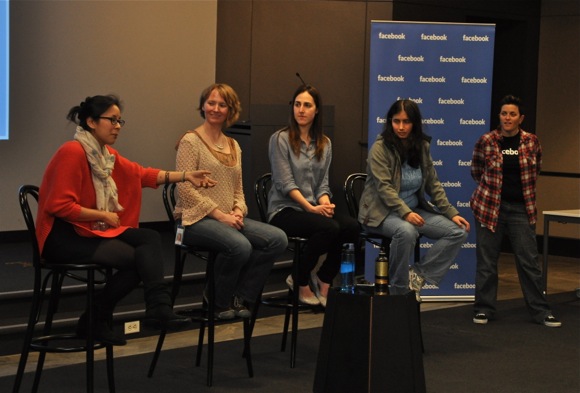 “Don’t be afraid to fail.” That was the resounding message four Facebook engineers relayed to a group of local high school girls at a first-of-its-kind event at the company’s headquarters in Menlo Park Thursday night. The gathering was part of an initiative by COO Sheryl Sandberg to get more women involved in technical careers.

About 30 students, who’d been selected by their teachers based on their interest and accomplishments in STEM (science, technology, engineering and mathematics), were at the Facebook campus to hear how these older — but still young women — had found their muse via engineering. The students were from Menlo-Atherton High School, Eastside College Prep, EPA Phoenix Academy, and Mid-Peninsula High School.

The subject of failure had come from a question asked by one audience member: “What’s the hardest part of your job?” Product designer Carol Pai (far left in photo) was first to respond:

“People who fail and stop trying will always be failures…Remember that failure is part of being successful.”

That prompted panel moderator Sara Sperling (far right in photo) to jump in and say: “No one at Facebook is here without failing a lot. Even if it’s not perfect, keep going, keep working at it.”

Software engineer Jessica Gronski (second from right) offered another perspective: “Unlike biology, you aren’t going to kill some thing.,” which drew chuckles from the crowd.  She continued: “In computer science, being OK with failure is really important. Many people wish they could plan their life ahead of time. But it’s important to really be great at what you can do right now.” 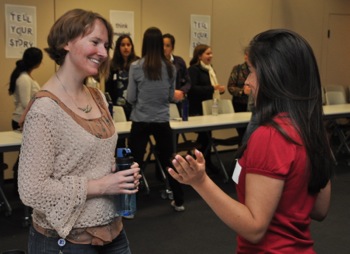 The panel, which also included data scientist Moira Burke (left in photo with student)  and software engineer Jen Dolson, urged their female audience to “go as far as you can in math because there’s not going to be a career in the future where math isn’t important” and to “encourage your local your local high school district to have at least one computer science class along with math and chemistry.”

Wanted to say how much I enjoy how Facebook put the best ideas to work when others sit around.

This is an idea I have been thinking about for a long time. Facebook is where I wanted to start.

wanted to talk about where the future is heading with mobile shopping, Facebook needs to jump on this idea now. Facebook is the only company that can make it work on a social level. I am talking about taking the 3 things that Facebook can change and work with. Making ground breaking social technology for shopping at stores. 1 Mobile Smart phones have pay apps, 2 Photo apps and 3 social networking apps. If Facebook could Fabricate a live purchasing app for shoppers so they don’t need checkout lanes any more that would change the social structure of shopping. freedom of shopping would make shopping more social.

Why Facebook. The Store would need to have a secure way of saving receipt paper. FACEBOOK can socialize where Friends shop at. When we Pay with our smart phones a photo id prints out with my receipt from our Facebook profile. This would be a true structure for ( freedom to shop) using your smart phone as a U scan, pay app, and social network tool

No More waiting in lines. Bringing the internet and the physical shopping together on a social level.