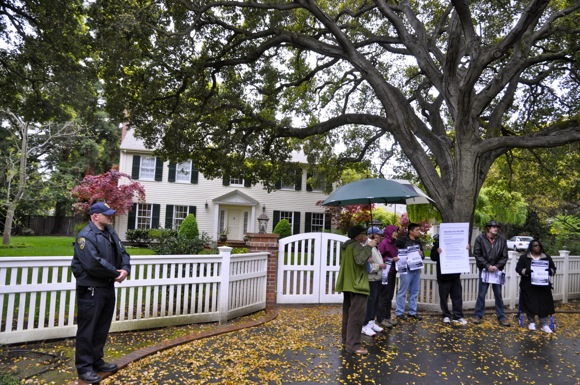 If body count is an indicator of victory, then law enforcement ruled the day at the noon protest rally by a self-described “coalition representing thousands of community members, students, union members and activists” in front of Meg Whitman’s Atherton home today. While there were just six protestors, members of the 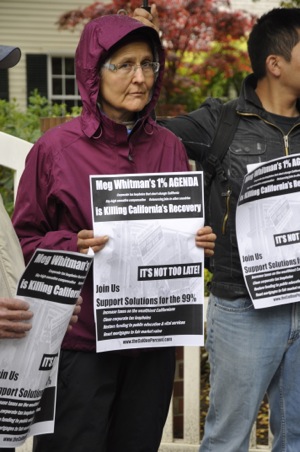 Atherton Police Department — joined by uniformed officers from other local jurisdictions — numbered at least twice that. “You never know how these things are going to do, so we needed to be prepared,” said an office standing at one end of the temporarily barricaded street.

The protesters, some who represented a particular group like Occupy Redwood City and Occupy San Jose and some who were there as private citizens — including Joseph Rosas, Jr., a candidate for the California State Assembly District 24 — distributed a report called Meet California’s 1% that purports to explain “how Wall Street banks, big corporations and the super rich are killing the recovery.” In it, Whitman is identified as one of 12 “rich CEOS and and executives in the Golden State who pocket millions while backing and bankrolling an agenda that keeps economic and political power in the hands of the few.”

Alluding to the sparse turnout of demonstrators, one protester said, “While we’re just a few today,  we’re here today to represent the 99% and ask the 1% to pay their fair share.”

In a bit of irony, another protester was overheard saying, “Her house isn’t very big.”