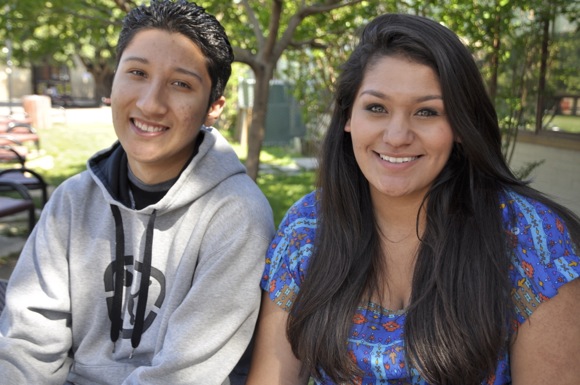 The Peninsula College Fund scholarship awardees Diana Lopez Solorzano and Cristian Diaz have much in common. They both attended Menlo-Atherton High School all four years, live in East Palo Alto, and are headed to a UC campus. What they’re most proud of, though, is that they’re both the first in their family to go off to a four-year college. That fact, understandably, also makes them a little bit apprehensive.

Said Diana, who will be attending UC Davis: “It’s a little scary when I think that I’ll be attending a prestigious university with 30,000 other students and a lot of academic vigor. But, it’s also exciting. I’m interested in possibly majoring in international relations, but I want to take as many classes as possible, exploring other topics.”

Cristian is headed to UC Merced, where he plans to major in biology. He hopes to eventually become a pediatrician. The older brother of 11-year-old triplets, he spends much of his free time with his family.

“I think I may get homesick,” he said, “But, I get excited when I think about setting out on a new path and all of the freedom that comes with it.”

In addition to concentrating on their studies while at M-A, both Diana and Cristian have been involved with programs that they say have helped prepare them for college life.

“I’ve been part of Build for all four years,” said Diana, who hosted the Peninsula team’s most recent business plan competition at Menlo College. The mission of Build is to use “entrepreneurship to excite and propel low-income students through high school to college success.”

Cristian has participated in the Advancement Via Individual Determination (AVID) program that supports students (particularly those “in the middle”) in preparing for and gaining acceptance to college. “It’s a great program,” he said. “And, I’ve gotten to meet some people I wouldn’t have otherwise. The peer tutoring helped me make new friends.”

This summer, the two hope to find summer jobs and both will be taking advantage of the Bridge programs at their respective UC campuses.

The mission of Menlo Park-based Peninsula College Fund is to help local minority students succeed in college through financial aid and mentoring. In addition to Diana and Cristian, the organization announced 12 other scholarship awardees: