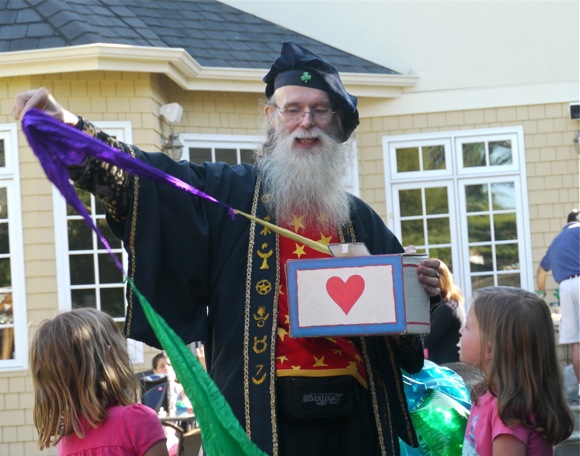 We have a magician in our neighborhood in Menlo Park. His name is Hugh, The Magic Beard. Kids around here call him Huey.

In most neighborhoods, people wouldn’t notice him, or if they did, they’d notice him for his long beard and sixties-hippie appearance. However, this is Northern California, home of the Grateful Dead. We’ve all seen many folks who look like Hugh around here.

On the other hand, because my family and I have invested extra time in our neighborhood, we’ve gotten to know him pretty well. And boy, what a find Hugh is!

First, he’s a fabulous magician. He even dazzles adults like me who are absolutely certain there’s no such thing as magic. I still can’t figure out how he gets all those coins and handkerchiefs to appear, and I’ve seen his routine many times. 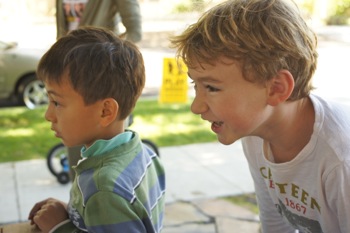 Besides being a technically excellent magician, Hugh’s a very good showman. He’s not flamboyant, but he captivates practically everyone in his audience, every time.

What’s more, Hugh is a very nice guy. Every time I’ve asked him to come over here to give neighborhood kids a show, he’s found a way to accommodate us. In fact, he was just over at our yard to help my family and over 100 guests celebrate the publishing of my new book, Playborhood: Turn Your Neighborhood Into a Place for Play

. He’ll also be performing at my neighborhood summer camp, Camp Yale, next month. He’s told me more than once that he’d be very happy to teach my kids his tricks if they ever want to learn.

Also, Hugh’s a fascinating conversationalist. He’s had a very eclectic career, and he travels often to very interesting places.

Best of all, he lives five houses away from my family! That means we run into him often. Hugh isn’t some mysterious performer who my kids have only seen once at an event. To them, he’s Huey, a really nice neighbor who also happens to dazzle us once in a while with magic.

In other words, he’s a neighborhood treasure, an important part of the childhoods of my kids and other kids around here. Chances are, if you don’t know your neighbors very well, you’re missing a real treasure like Hugh.