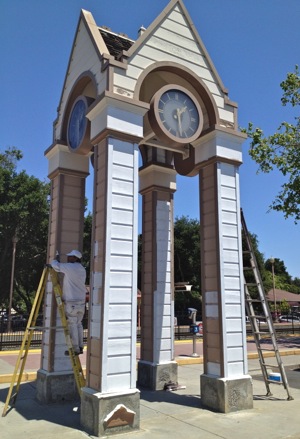 Envisioned in the 1980s as a visible focus for the Menlo Park Transportation Center, the city’s clock tower is getting spruced up in anticipation for an anniversary celebration planned for Tuesday, June 19 at 11:00 am, sponsored by the Menlo Park Historical Association. The Transportation Center provides train, bus, bicycle and automobile transport service in one central location.

The clock tower’s construction was largely due to the persistence of Menlo Park City Council member Peg Gunn. Designed by local architect and former Planning Commissioner Albert Hoover of the firm Hoover and Associates, it was made possible by a generous donation from Tom Ford of the Ford Land Company. In preparation for the June event, the City of Menlo Park has repainted the Tower, and the Chamber of Commerce plans to install permanent exterior LED decorative lights.

Jim Lewis of the Historical Association will serve as the event’s Master of Ceremonies, and Mayor Kirsten Keith is scheduled as a speaker. Representatives of the families of Tom Ford and Al Hoover as well as Caltrain, Caltrans, government and business are expected to be in attendance. The public is encouraged to attend what is planned as a fun-filled, family friendly, community-wide event.