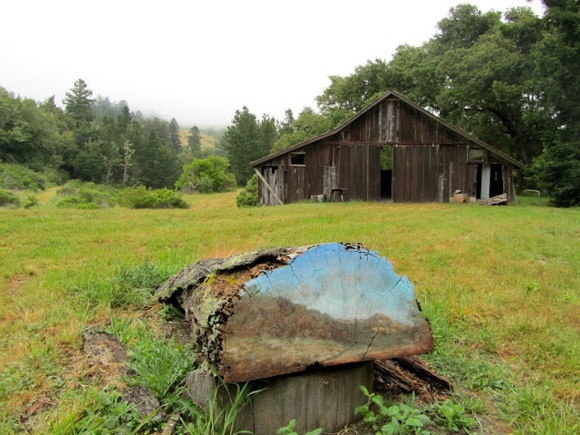 The weekly scultpure tour group wasn’t the only thing descending on the rolling ranch land that’s home not only to the Djerassi Resident Artists Program but the sculpture created there and left behind. When we visited the property, located off Bear Gulch Road in Woodside, it was shrouded in a heavy, drippy fog. While that limited the views, it enhanced the moodiness and mystery of individual pieces.

Sculpture tours are offered each year from late spring to early fall. Director’s Tours, led by Margot Knight, are $50 and include in-depth observations about 25 pieces as well as a visit to the Artist’s Barn; three dates remain this year. Two-Mile Tours are free but require registration and cover about 15 sculptures; reservations for July/August/September/October dates open on Wednesday, June 6 at 9:00 am (650-747-1250). 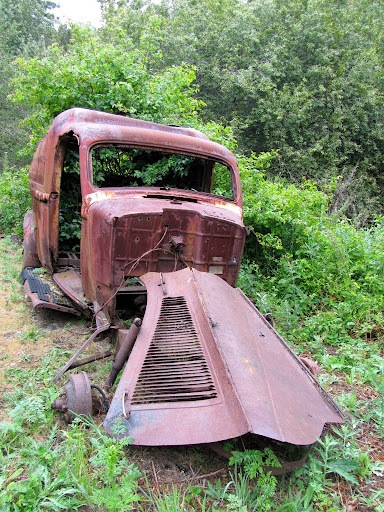 The Artist Residence program began in 1979 and welcomes about 90 artists a year who stay about a month. A conservation easement sale to the Peninsula Open Space Trust set development limits and allows the property’s natural resources to be protected in perpetuity.

While conditions during our visit — accompanied by Menlo Park-based photographer Frances Freyberg — precluded ocean views, it allowed us to stretch our imagination at times. Artist Alison Moritsugu used a log near the old cattle barn (now steel-reinforced) to capture one vista using oil paint. “It allows a person to experience the landscape and its reproduction at the same time,” said program assistant and artist Laura Amador, who led our Two-Mile Tour. 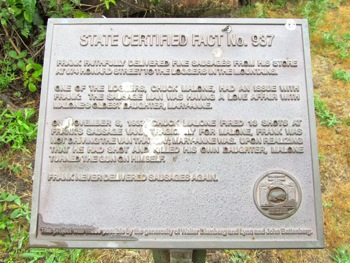 Artist James Chinneck used his month in the program to create a series of State Certified Facts that are sprinkled around the property and mimic historical markers. One is near an abandoned, bullet-ridden, old truck; it reads: “Frank faithfully delivered sausages from his store at 974 Howard Street to the loggers in the mountains. One of the loggers, Chuck Malone, had an issue with Frank the Sausage man was having a love affair with Malone’s oldest daughter, Mary-Anne. On November 8, 1937, Chuck Malone fired 13 shots at Frank’s sausage van. Tragically for Malone, Frank was not driving the van that day; Mary-Anne was. Upon realizing that he shot and killed his own daughter, Malone turned the gun on himself. Frank never delivered sausage again.”

Among the property’s oldest works — pieces are not maintained but rather allowed to deteriorate — is John Roloff’s Vanishing Ship (shown below with tour group), constructed of steel, glass, natural stream water and a concrete cisten. Amador explained that it was a good example of the land’s affect on art: “Originally there were native plants growing inside fed by the spring water, but the El Nino winter in 1997-98 altered the stream’s route and the plants died. Now the piece is home to banana slugs.” 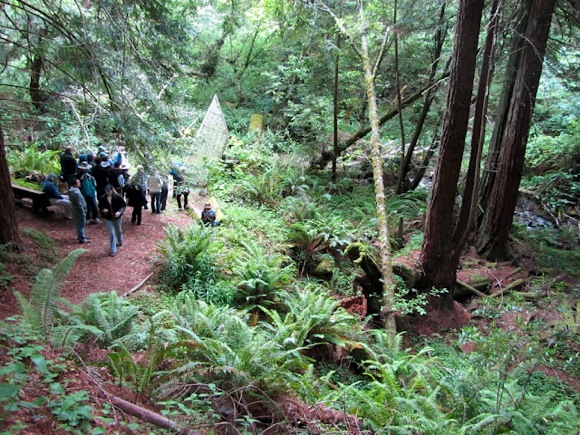 I once worked for SMIP Ranch. I painted the white wooden fences from front to back. Dr. Djerassi gave me an old jeep to drive. He was such a kind loving man. His son Dale and I once went skinny dipping in the lake. He was younger than I but it seemed to me we were equally full of life. I lived at Star Hill Academy For Anything, but not directly on the commune lands but the 60 acres that Jimmy Wickett later sold to pay the taxes. Peter Garrett was my boyfriend back then. He’s still on 2001 Kings Mtn. Road. I am sure.
I would very much love to come home to die there. To be buried in the woods I once loved so much. To feel the breeze of the twins who burnt their house down leaving behind only the ashes of their souls. I wonder could I come to be buried there? For I am dying of Cancer and I am old. I want to come home.