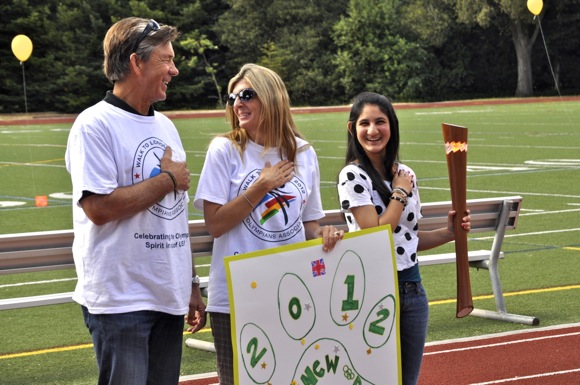 This morning over 400 student scholars gathered at Sacred Heart School in Atherton to launch the 23rd year of the Peninsula Bridge summer program. The theme — and challenge to the scholars — is “Walk to London,” a mere 5,731 miles for the SHS stadium, and to kick the program off, there was a mini Olympic torch relay. It was the first time in 23 years that all the students gathered for the opening event.

The goal of this year’s Olympic theme is to increase the summer scholars’ knowledge of teamwork, nutrition, fitness, geography, and current events as they compete to see which independent school site or grade will “reach London” first, and which student(s) will walk the farthest. They will track their progress on pedometers provided by the Palo Alto Medical Foundation.

“This year’s theme will give them even more opportunities to unleash the champions within and celebrate their capacity for achievement,” said Deirdre Marlowe, who is Executive Director of Peninsula Bridge. 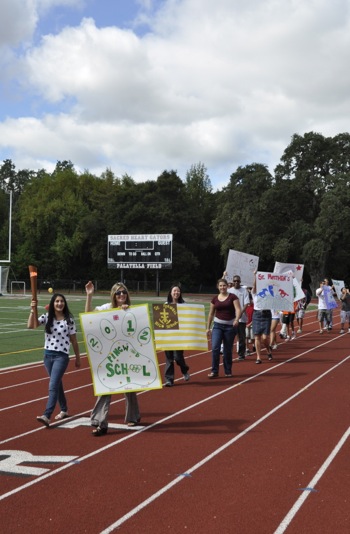 Each independent school site hosts specific grade levels and offers accelerated math and language arts as well as various enrichment activities.The academic classes help prepare students to excel in the upcoming school year.The enrichment activities provide opportunities for summer scholars to make choices about and manage their learning. Both combine to facilitate a successful transition from elementary school to the college track in high school.

Each of the Olympians spoke to the students related some of their athletic journey. “I grew up in Menlo Park and competed in my first race at Burgess Pool,” said Anne Cribbs. “I announced to my mom, ‘I’m going to the Olympics’ and with persistence and dedication, I made it.”

Chris Dorst reminded the kids to “listen to your coaches and teachers. They are the people who are going to help you along the way.”

Added Patrick Burrows, who now coaches at Castilleja School: “It’s as much about the journey as it is where you’re going. Along the way you learn new skills and how to apply them — that’s what’s important.”