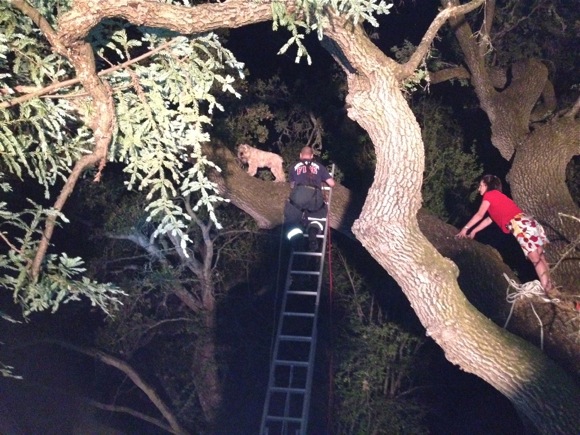 Menlo Park Fire Protection District Firefighters recently responded to a report of a dog in a tree in Atherton. Most people who heard the radio-dispatched call believed  that the reporting party must have been mistaken since everyone knows that dogs can’t climb trees right – wrong.

A 40-pound, 8-year -old Wheaten Terrier named Guinness climbed a large oak tree while chasing a raccoon, who sought refuge up the same tree. Firefighters were amazed to find that the dog had climbed over 30 feet up into the oak.

Working with the residents, who have asked not to be identified, the firefighters encouraged the dog’s owner, who was also in the tree, to not climb any higher for her own safety.

Fire Captain Bill Gilmore, Engineer/Paramedic Felkak House and Tony Eggimann then improvised a rescue harness using the dog’s car travel harness, established a rope rescue system, and used a 36-foot ladder to reach the dog, who was now frozen in place, nervous and shaking. Firefighter Eggimann climbed the ladder, secured the animal in the harness, and, after giving him a treat, Guinness was carried down to the ground.

“In my 32 years in the Fire Service we have been asked  to rescue many cats in trees and while we have rescued dogs from pipes, culverts, under homes, and many other locations closer to the ground, I have never seen or heard of a dog that could climb a tree,” said Fire Chief Harold Schapelhouman. “I’m glad this had such a positive ending. Guinness is an amazing animal”.
Category:

Amazing story!!!! Our two terriers have often looked like they would like to do it, but so far have not!!!

Our two rascals often look longingly at squirrels up in trees, but so far have not tried it!!!