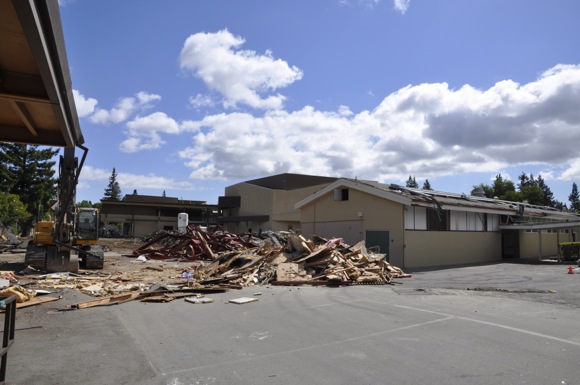 The demolition of Hillview Middle School, which was built in 1949 with additions to its core campus taking place throughout the 1950s, began in earnest this week. All will be replaced by new two-story buildings in an area that was once the school’s playing fields — with the exception of the 1999-built multi-purpose auditorium, which will remain.

In its early years, Hillview was a K-8. It was then converted to Menlo Park City School District’s one middle school. The new buildings, scheduled to open on September 4 (with a grand 0pening celebration slated for August 28) will accommodate a student population of around 900. 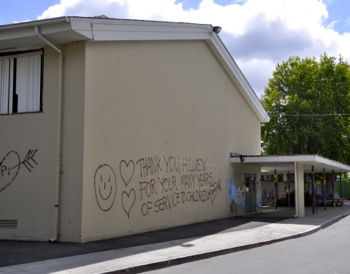 The original school demolition will continue to take place over the next month. The school district posted this update: “As part of our environmental efforts, building materials will be separated and recycled/disposed in a proper manner. Asphalt from the roadways and concrete from the buildings will be reused on site. This will help save energy cost as well as help our recycling efforts.

“The contractor continues to work hard in completing all work in both the interior and exterior of the building. In the next two months, the contractor will complete all site work in the school courtyard and roadway leading into the new school as well as most of the landscaping activities. The contractor is also hard at work completing the interior spaces and the District will be setting up the classroom furnishings and preparing the rooms for the incoming students. Construction of the new synthetic all-purpose field is scheduled for the fall with all work to be completed by December 1, 2012.”

For those baby boomers who came to Menlo Park and Atherton in the 1950s and went through Menlo’s three K-8 schools — Hillview, Encinal, and Oak Knoll (the latter two modernized with some original buildings intact) — the demise of Hillview is bittersweet. But it was also the impetus for the three elementary school’s graduating class of 1962 to plan a 50th reunion, scheduled for September 22 at Burgess Park. And yes, there’s a Facebook page to get more details.