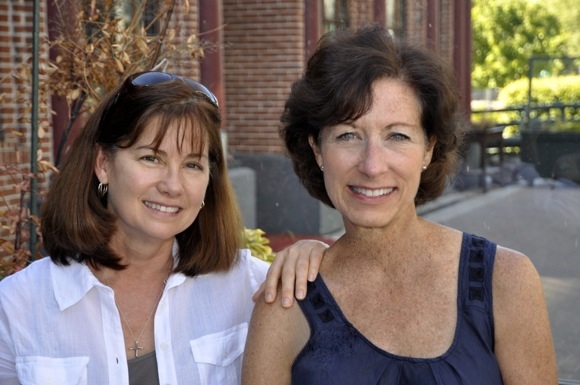 Terri Bullock “blames” Merrit Sawyer for getting her involved with the Windrider Film Forum, which is taking place this Thursday through Sunday (July 12-14) at the Menlo-Atherton Performing Arts Center. Residents of Atherton and Menlo Park respectively, they’d been good friends since the time their boys were in kindergarten.

“Four years ago, Merrit was invited to Sundance to attend the Windrider Institute class,” she recalls. “Her husband couldn’t go, so she asked me. The irony is that up to that point I wasn’t much of a film goer — other things took priority in my life. But, that week I saw 17 films and was converted!”

Adds Merrit: “It seemed like a great opportunity. There are hundreds of films at Sundance but Windrider helps guide your selection. During class time, we also were shown short films, which was a new category of films for me. And, we got to hear from producers, actors and directors.”

Terri (pictured left, above) says the pull of independent films was strong. “You don’t leave just feeling entertained, you leave wanting to take action,” she says.

Today, Terri is Director of the Windrider Film Forum Bay Area, and Merrit serves as Producer. During the upcoming Bay Area Forum, the Sundance experience of viewing films and hearing from their creators is recreated. The three films being shown are:

Thursday, July 12 at 7:00: Rising From Ashes, a feature length documentary about the first Rwandan National Cycling Team and their six year journey to fulfill every athlete’s dream to attend the 2012 Olympic Games in London. This is a special “work in progress” screening with $15 ticket donation going to Project Rwanda for the completion of the film. Screening followed by Q&A with Producer, Director and Editor, T. C. Johnstone.

Friday, July 13 at 7:00 pm: The Hammer, a docudrama depicting the struggles and successes of Matt Hamill, who was born deaf, as he pursues his education and his passion for wrestling. The film is partially in American Sign Language with English subtitles. Screening followed by Q&A with Director, Oren Kaplan, and lead actress, Shoshannah Stern.

Saturday, July 14 at 7:00 pm: Red Dog, which won the the Grand Prize Award for Best Narrative Feature at the Heartland Film Festival 2011, and the awards for Best Film and the Australian Film Institute (AFI) Member’s Choice at the 2011 Australian Academy of Cinema and Television Arts Awards. It tells the true story of a dog in the back country of Australia and how he became the catalyst for creating a community out of a group of mavericks. Screening followed by Q&A with Josh Lucas, lead actor, and screenwriter Daniel Taplitz.

Merrit says that they went to three festivals to select this year’s films. “We do have a certain filter of what we’re looking for,” she says. “But beyond what we like, if a film gets picked up for general distribution, we can’t get it. The other challenge is having the filmmakers/actors available during the event. All of that figures into our final decision.”

The pair were quick to acknowledge the help they’ve received from Ralph Winter, producer of X-Men and Wolverine. “He’s become a real supporter and flies up from Southern California for the Bay Area Forum,” says Merrit. “He’s moderating the panel after Red Dog this year.”

How has their experience with Windrider Film Forum changed them personally?

Adds Merrit: “I echo that. I’m also thankful to get to know the people who create films.”

Tickets for the Windrider Film Forum — $15 for adults, $5 for students; $35 for adult event pass, $15 students  — can be purchased in advance online.