What’s the story behind the tower being built on Cotton Street in west Menlo Park? 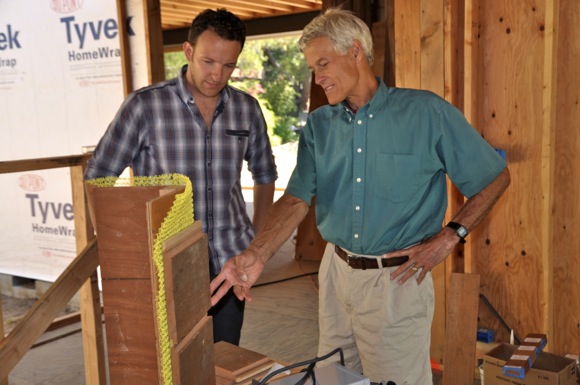 That’s the question we’d gotten from a number of InMenlo readers, so we dropped by the building site in west Menlo Park to talk to architect Dan Spiegel (left in photo) and general contractor Gene Hunner (right).

Dan explained that he tore his boyhood home down to be replaced by a new house for his parents, Helen Blau and David Spiegel. “The people my parents bought the home from had stitched two Cliff May houses together,” he said. “There was a big open glassy area between the two. Due to age, renovation wasn’t an option.”

Before designing the new home, Dan did a lot of research, going back to the time when Menlo Park was largely farmland. “We even uncovered some old terra cotta pipes when we were excavating,” he said. 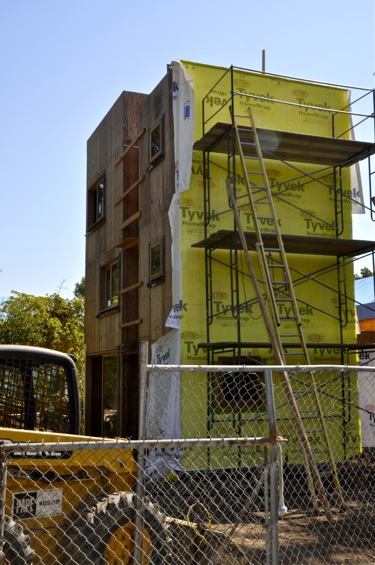 Influenced by the early 20th century architect William Wurster, who designed prototypical ranch houses, as well as Joseph Eichler and Richard Neutra, Dan’s goal was to design a home that deferred to the landscape and climate. “If you point a house in the right direction, you don’t need air-conditioning,” he said. “That may mean situating the home in a different direction on the lot so that the wind and air can move through it.

But why the tower?

“We designed the part of the house my parents are going to live in to be spacious with a lot of big windows,” he said. “The part that they will use only occasionally — the guest bedrooms and bathrooms — we designed as densely as possible, hence the tower. The result is a kind of hybrid of a country and city house.

“We utilized every millimeter of the 30-feet height limit for the tower. You really get a different feeling of Menlo Park from the different levels. You go up one level and you’re in the canopy. At the top of the tower is a roof deck, and from there it’s like looking over Central Park.”

Gene added that the the large windows were really a challenge to install: “They came from Canada, and I don’t know how we got them off the truck, let alone put them into place.” He also said that the pitched roof that people currently see is just temporary to protect the finished areas underneath; the house will have a flat roof.

InMenlo will make a return visit to the Cotton St. home when it gets closer to completion.