“In the Shadow of HIGGS” is SLAC lecture on July 31 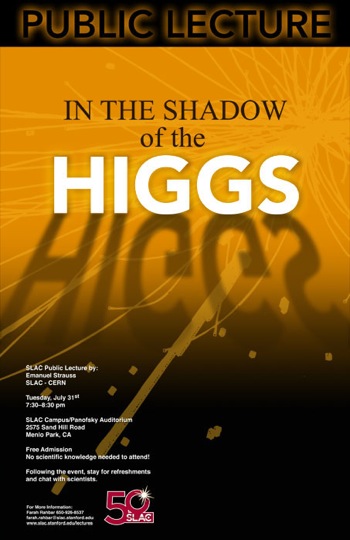 This has been an exciting summer for particle physicists who have collectively spent the last 40 years hunting for the Higgs boson. Last year, ATLAS and CMS, the two largest experiments analyzing collisions produced by the Large Hadron Collider, observed tantalizing hints of this elusive particle. On July 4th, the two collaborations unveiled their latest data and announced the independent discovery of a particle. It could be the Higgs, which has long cast its shadow, but never been seen.

Has the Higgs particle finally been found? Are we just seeing fluctuations of the quantum foam, or perhaps another particle not yet anticipated? What will we learn from additional data in the coming years? In a public lecture scheduled for 7:30 pm at Panofsky Auditorium at SLAC on July 31, Dr. Emanuel Strauss will provide context for the amazing interest which these questions have generated, and where we go from here.

Strauss joined SLAC as a Research Associate in 2009 after obtaining his PhD from the Stony Brook University. The research for his thesis, probing Electroweak interactions and searching for the Higgs, was performed with data from the now defunct Tevatron outside of Chicago. Since 2010 he has been living in France, with a line of sight view of the complex where CERN smashes high-energy protons together. He is heavily involved in the operation of the trigger and data-acquisition system of the ATLAS experiment, and spends what time he has outside of the control room searching for the Higgs and atypical signatures of new physics.

What I would like to clarify is if it is the particle itself that is being investigated or the medium through which all matter travels, i.e. giving electrons, protons and neutrons its characteristics?