After months of anticipation, yesterday morning (Aug. 18) finally arrived, along with scattered clouds and sun warming the air to a civil 65° F or so at 7:30 am as my neighbor Anne and I rode to Menlo-Atherton High School for the start of the Tour de Menlo. About 40 cyclists were milling around. The starting time was a flexible 8:00 to 10:00 am, so more cyclists arrived later.

Up: We intended to do the 65-mile ride, so at 8:00 am sharp we set out up Valparaiso, which at this time on a Saturday morning was pretty much devoid of cars. We turned north on the Alameda without incident.

Down: But at mile 5, as we neared Jefferson, our rear tire blew, leaving a 1-cm hole in the tire. This tire had 2,300 miles of wear on it. We’d had been thinking of changing it, but decided to wait until after the Tour. Bad decision. Meanwhile, despairing of continuing on the ride, we called the supportive wife to pick us up, sending Anne on. 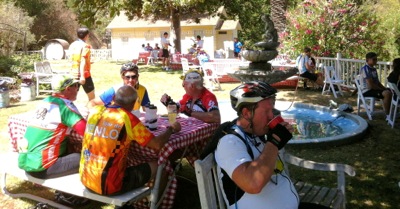 Up: But then unexpectedly Colin showed up in the sag wagon and cheerfully volunteered to fix the flat. First, we each ate half a power bar to free up the wrapper. Then Colin inserted the wrapper between the hole in the tire (called “booting” the tire, normally done with a dollar bill) and a new inner tube, pumped it up and good to go. About this time Sherwood, a neighbor, came along, so the two of us rode together — my tire bump, bump, bumping. We crossed over to Canada at Jefferson, proceeded north beyond 92 turning east on Bunker Hill.

Down: At the bottom of Bunker Hill at mile 17 the rear tire blew again, this time the hole enlarged to 3-cm, clearly now beyond booting. Regretfully we called the supportive wife again. Less than an hour later I was leaving my house in Menlo Park with my second bike — 3 lbs. heavier and no clip-on pedals. I headed down Foothill Expressway hoping to catch up with the bulk of riders.

Up: After about 2 miles the bike began to feel ok. Just past Los Altos, off to the right at Burke Rd., an unexpected (by me) rest station appeared. I stopped to consume a banana. Then while drinking some cold water, who should show up but Anne, who had decided to forego the climb up to Altamont on Page Mill and instead crossed over to Foothill. So we were again cycling together. Foothill has a consistently wide bike lane and few hills, which is the reason so many cyclists are always on it. Even after crossing under 280 when it becomes Stevens Canyon Rd., the going is pretty easy, although the shoulder begins to disappear and on weekdays the gravel and cement trucks dominate. The real challenge was Montebello Rd.

The goal was the Picchetti Winery, about ½ mile up Montebello, which has a really steep grade. So the only thing to do was shift to the lowest gear and just grind away, ignoring the pain and heavy breathing. (Many participants chose to walk this part). Bikes galore appeared (pictured) on the bucolic grounds of the Picchetti Winery where the Rotary Club of Menlo Park hosted a delicious BBQ lunch.

After lunch — the highlight of the Tour — the ride back to M-A was anticlimactic. Anne had chosen to skip this part, so to break the monotony I paused at Peet’s in Los Altos for a cappuccino — why not? Tired but happy I arrived back at M-A about 3:00 pm having ridden 49 miles on Tour routes within 5.5 hours of riding time. I’m already looking forward to next year’s Tour, for which you can bet I’ll have better tires.

Jym Clendenin, a frequent contributor to InMenlo, became an avid biker after retiring 4 years ago. This was his third Tour de Menlo.