Throughout June and July, children across the Peninsula saved their spare change to buy a well for a community in Ethiopia. The summer mission project, sponsored by the children’s ministry at Menlo Park Presbyterian Church, united the efforts of two summer camps as well as Sunday morning programs, and culminated with a Walk4Water in Menlo Park at the end of July. 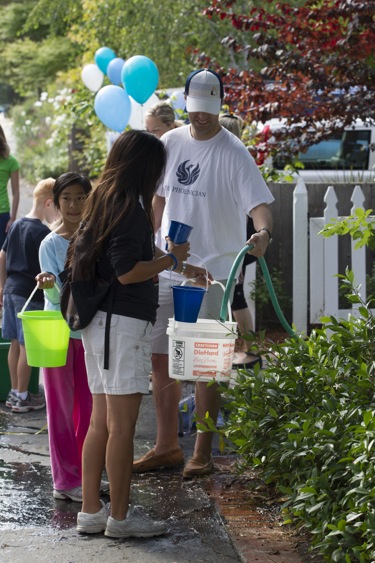 “We talked about the need for water in Ethiopia on Sundays,” said Jeremy Drew, MPPC’s Director of Children’s Ministry. “We challenged them to go without sodas or juice drinks and drink water instead. The money saved would go towards the project.”

During the summer, several of the children hosted bake sales and lemonade stands to raise awareness and extra money. The kids who attended the Zapped! Day Camp for Kids and the Creative Kids Camp in July filled jars of change daily.

On Saturday, July 28, families met at Menlo Park Presbyterian Church on Santa Cruz Avenue in downtown Menlo, grabbed a bucket and walked a half-mile to a church member’s home serving as a water source. After filling their buckets with water, they turned around and walked back to the church to complete a full mile, representative of the walk many in Ethiopia must do just to collect clean water.  Several Menlo Park neighbors stopped to watch, joined the walk themselves or made a donation. More than 190 people walked for water that day, raising awareness and educating the children and community about the need of clean water.