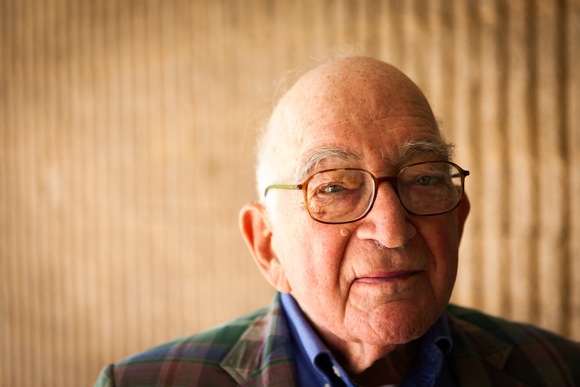 Editor’s note: This weekend the SLAC National Accelerator Laboratory in Menlo Park will celebrate its 50th anniversary. We used the occasion to schedule a visit with Dr. Sidney Drell, the Stanford emeritus professor who has been a part of SLAC for all five of its decades. A theoretical physicist, Drell is equally well known for his tireless work in the areas of national security and arms control, which was the focus of the time we spent together at his SLAC office.

InMenlo: Given that your scientific career came first, how did you get involved in the public policy discussion of arms control?

Dr. Drell: When I was a graduate student at the end of World War II, the two atomic bombs were dropped on Hiroshima and Nagasaki. That action couldn’t help but weigh on you, going from a few tons of weapons to kilotons — and now, of course, megatons. If any device won the war, it was radar not the two bombs. And, of course, the troops themselves.

Fast forward to 1960. One day I get a phone call from Washington. The scientists who had been involved with ending the war were older and, at the same time, we were entering a serious Cold War period. With the advent of intercontinental missiles, oceans could not protect us. The time had come to gather a new generation of scientists who would be willing to work on issues of national importance.

Charlie Townes, who invented the laser, was thinking about organizing a group of scientists who would work together during the summer. I was a professor and had family responsibilities, so I was initially reluctant. At the same time, it was an opportunity to make a contribution in an area where there was a real need. Having achieved a level of success, joining with the other scientists was a way I could give back. The group became known as JASON.

InMenlo: What kind of work did you do and what does it stand for?

Dr. Drell: The first thing we worked on was technical intelligence, focusing on getting an accurate picture of what was going on behind the Iron Curtain. We wanted to go beyond the notion that they would bury us, or alternatively, that they were idiots. Neither was the truth.

I’m now one of the few Neanderthals who’s been involved since the beginning. We continue to have the brightest young people join us. It’s hard work, and we contribute by working on problems that can use our areas of expertise. The work we do is classified, but it’s done outside academic settings.

As for the name, a lot of people think it means July/August/September/October/November, but, in reality, the group got its name from one of the original member’s wives, who suggested the Greek mythological figure Jason. 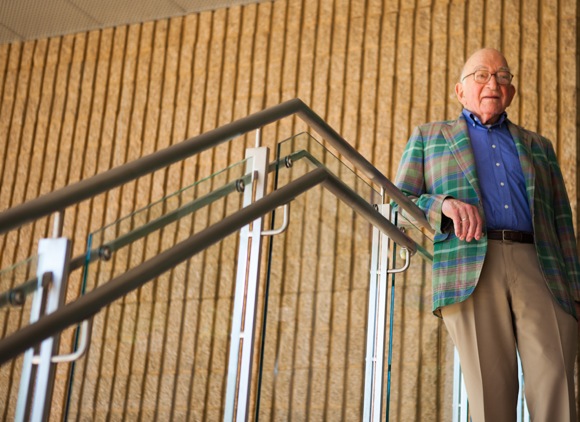 InMenlo: What are your current views on nuclear disarmament?

Dr. Drell: I’ve gotten very close to George Schultz, who I first met after he was Secretary of State. It’s a privilege and pleasure to work with George — he’s a man of such intelligence and integrity. I cherish our friendship.

We are working together to get the world to take seriously the idea of moving towards zero, where nuclear arms are eliminated from the world entirely. Along with Henry Kissinger, Sam Nunn, and William Perry, we are working on the path to get to that goal.

I believe we can get there. Just look where we’ve gotten in the last 20 years. Who’s to say where we can get in another 20 years. Moving along the path, you build up trust and cooperation.

InMenlo: Has your view of nuclear disarmament evolved over the years?

Dr. Drell: I believe nuclear weapons were a important component of getting through the Cold War without going to war – that they did serve as a deterrent. Who would really have believed we’d go 67 years without using these weapons in war as we’ve done? I’ve ask historians and they can’t give me a parallel incidence.

We are now in a period of no existential enemy like the Soviet Union. Now, terrorism is the existential threat. In dealing with terrorists or rogue governments, nuclear deterrence doesn’t mean anything — the value has gone. Yet, the danger of the material getting into evil hands has gone up. So, what are existing nuclear arms deterring now? In this era, I argue that nuclear weapons are irrelevant as a deterrence.

InMenlo: What are you doing during what you refer to as your “August R&R month”?

Dr. Drell: I just finished the most powerful book I’ve ever read, Les Miserables. I got an iPad, and it was just there on the book shelf. As a morality play, it is so fabulous. I have a wife who is a reader, and she makes sure I’m not totally illiterate!

And, one of my great avocations is playing the violin in a string quartet. That’s definitely part of my R&R. It’s private and personal but so enjoyable.