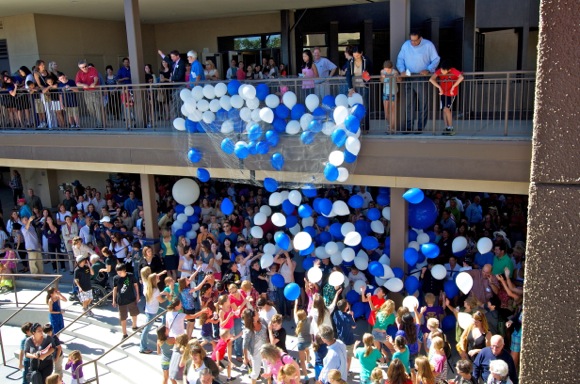 Where once there was a playing field that could be accessed not only from Santa Cruz Avenue but from the gates of homeowners on the west side of Hillview Drive, now sits the new Hillview School, which made its debut at a ribbon-cutting ceremony this morning.

While both Oak Knoll and Encinal Schools were refurbished with new buildings added to existing facilities, the old Hillview School was razed to make way for the new, using a model, according to former Superintendent Ken Ranella, similar to the building of the New York Met’s new stadium, which went up along side the old stadium in a parking lot. “The result,” said Ranella, “is a brand new facility that showcases the promise of excellent middle school education for the community.” 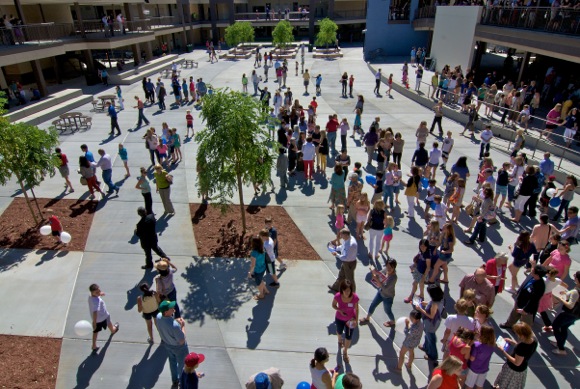 The total project, which cost $51.6 million, was completed on time and on budget. It includes 85,000 square feet of new facilities and will serve a student population of 860 in the coming 2012-13 school year.  The new auditorium, which Board of Education president Laura Rich characterized as a “community treasure”, seats over 300 with additional space for 100 stackable chairs. Every seat was taken this morning.

“When Ken [Ranella] and I were working on the transition, he told me that Hillview School had to be completed by  Labor Day, and if it wasn’t, I should just pack my bags and leave,” said current Superintendent of School Mauice Ghysels. “Ahmad [Sheikholeslami, the school district’s Director of Facility Planning and Construction] did a fantastic job of getting this done.” 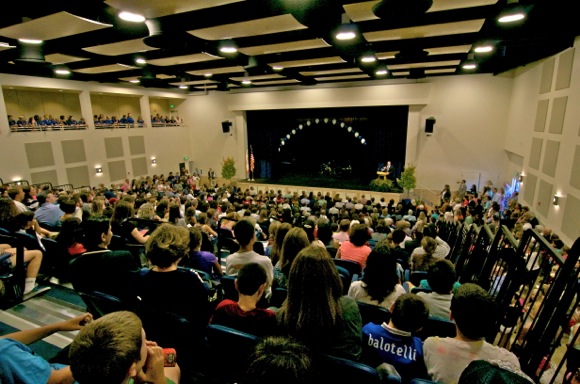 Other facts of note about the new Hillview School buildings:

When classes start next week, the campus itself will not only be new, the school will be lead by a new principal, Eric Burmeister. “With this new facility, Menlo Park will be at the center of educational innovation,” he told the crowd assembled in the auditorium. “Think of a campus that doesn’t so much as view hills, but rather as one that sits on a hillside and serves as a beacon for educational excellence.” 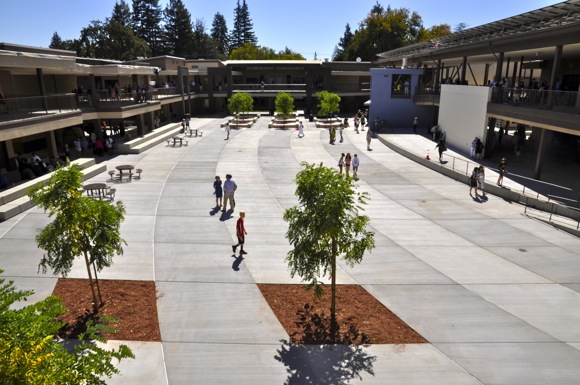 Footnote for long time residents: Tinker Park, a playground for the preschool set, is scheduled to re-open in September.

The situation changed in 1982 when voters approved annexation of the Willows, and the first class of children from the Willows entered Menlo Park schools in 1984. Explains the historical section of the Menlo Park City School District website: “Because there were more children east of El Camino than there was classroom space available, Willows children were bused over to Oak Knoll and Hillview. 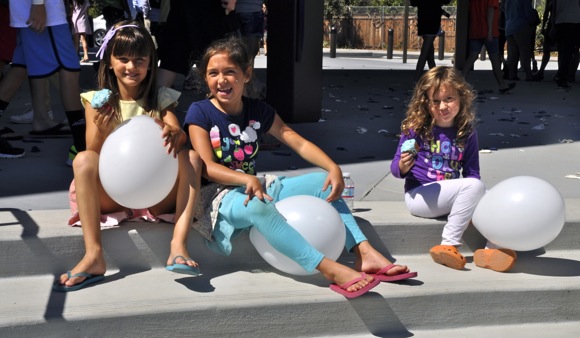 “Initially, the newly annexed families that were bused across town were delighted to be in the Menlo Park schools. But as new families moved into the Willows, pressure mounted for Willows children to attend a school closer to home. This pressure to redistribute enrollment helped spark renewed interest in the idea of turning Hillview into a central 6-8 middle school, and in February of 1988 the Board endorsed that direction.”

Hillview became a middle school in 1989.

Was the entire Menlo Park community invited to this opening?
I missed it and would have loved to have learned more about our new school facilities. Is there another open house planned for residents other than those attending these schools?