Night of terror is impetus for Dr. Martha Berliner to begin her artistic journey 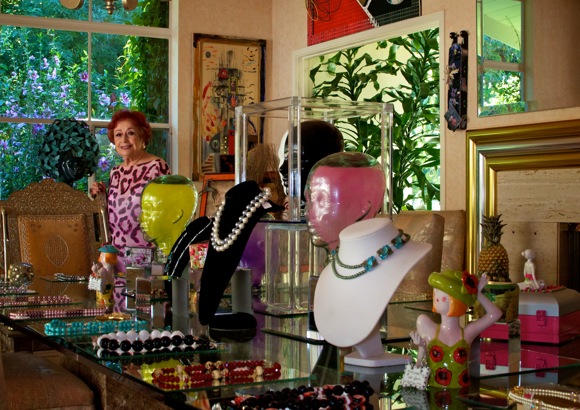 Ask Atherton resident Martha Berliner how she became an artist and she’ll quickly set the record straight: “I don’t consider myself an artist.”  But, the garden of magical artworks that fill her home belies that assertion.

As she’s done the past four years, she’ll be exhibiting her jewelry and boxes at the Atherton Art Exhibit on Friday, Sept 7. “The collages are just too hard to transport,” she declares matter of factly.

How she started making jewelry — her first artistic endeavor — is a story in itself. Both she and her husband David were medical doctors in Mexico City who came to the U.S. initially to do research at the University of Utah. They later moved to the Bay Area, where she worked at Stanford for Dr. Henry Kaplan, and he joined Alza Corporation as head of research.

When their two children were grown, they begin to travel widely. Over the years, she accumulated many pieces of valuable jewelry that she stored in a safe deposit box when not wearing. Soon after they came home from one cruise, they experienced a home invasion robbery. Martha’s cruise jewelry was still at home — the thieves took it all.

“It was a very frightening experience, but I’ve always been grateful for what they left,” she recalled. “I had little boxes of silver filled with my children’s baby hair and teeth. They believed me when I told them it was of little value to anyone else and meant so much to me.”

That night in 2000 marked a turning point for Martha. When her husband offered to replace what she’d lost, she vowed never to have expensive jewelry again. Instead, she started taking classes at The Bead Shop that was then located in downtown Palo Alto. As the couple continued to travel, she’d buy new beads. Soon, she had 100 necklaces, enough that the Bead Shop owner thought she should do a trunk show.

“But my husband said, you’re not going into the jewelry business,” she recalled. “I’d been involved with the Peninsula Volunteers for some time and got the notion that I’d donate the necklaces to help raise money for their Meals On Wheels program.

“I told my husband, and he thought it was wonderful idea. The PVs sent out invitations, and by the end of the evening, we’d sold 16,000 dollars worth of jewelry. Additional pieces were sold at a subsequent auction. I’ve been making jewelry ever since.”

Martha is less sure about how and why she started making her distinctive one-of-a-kind decorative boxes. She’d been doing collages and incorporated some of the techniques she was using. They all have a particular theme and some come filled with items that suggest they can be useful as well as beautiful.

Returning to the topic of that awful night 10 or so years ago, we inquire if she has any lasting effects: “Only one,” she said. “I can’t clean my closets, because I was held in one for an hour as I emptied all my jewelry out.”