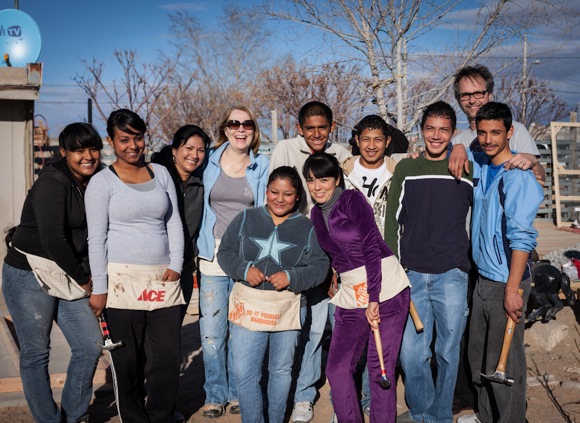 A mission trip to Juarez, Mexico offered through Menlo Park Presbyterian Church in 2005 inspired Joni Cropper and Scott Kline to start a program that would help children there break the cycle of poverty. Learning English headed the list, so they partnered with Silicon Valley Community Foundation to set up the non-profit organization, Juarez Children’s Education Program.

“If kids can learn English, they can get a good job,” explained Joni, who lives in Woodside. “The issue is that kids don’t stay in school. They drop out to help support their families.”

The Mexican government doesn’t pay for middle and high school education, which costs about $700 per student. “Initially we supported six kids, two of whom went on to college,” said Joni. “As we started growing the program, we realized that tuition was not enough. These kids live in crate houses – there’s no place to study. So, we started building libraries and hiring English tutors.”

JCEP faced additional challenges when there was an escalation of violence among Juarez-based drug cartels. A van was purchased so that kids could travel to school safely. “The situation has calmed down a bit, but one of our mentors and librarians, Susy, is still driving the kids,” said Joni.

Staying with Susy and husband Leo on a recent trip to visit with the kids, Scott learned about the need for additional libraries. “Right now, each is open three days per week with two employees in each library,” he said. “To have them open five days per week would take an extra two employees per library per day twice a week.”

Currently, JCEP is supporting five students in college and three in high school. They’re holding their annual fundraiser on Sunday, Sept. 30th at Joni’s home. In addition to food and drink, the evening will be set off by a beautiful harvest moon! If you’re interested in attending, you can contact Joni at joni@cropper.org.

“We finished up our most recent visit by grilling burgers, which the kids always like,” said Scott. “It was great to have everyone together. My Spanish is still a bit spotty, so through a translator, I told them how proud we were. How they are part of a team comprising hundreds of people including all of our donors, people praying for them, their teachers and parents. I think they get it and will continue to take positive steps.”

Hi Joni,
I grew up in El Paso and my first boyfriend lived in Juarez. People would easily enjoy what each country had to offer. Now the Juarez mayor commutes each day to work while his family lives safely in EP. Please be careful in Juarez and add me to your mailing list. If I am in town I would like to attend and support your work.
Best,
Cheryl

Cheryl, Thanks for sharing. I would love for you to come by if you are in town. Thanks, Joni