Joseph Eichler’s legacy is focus of documentary film to be screened in Menlo Park on Sept. 29 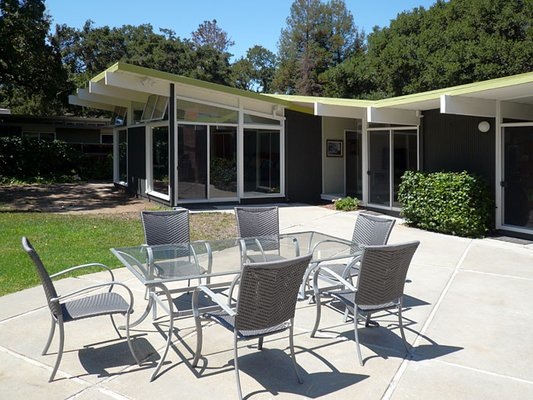 Realtor Monique Lombardelli is, in many respects, all about Joseph Eichler. At McGuire Real Estate, she specializes in selling Eichler homes. She currently lives in the Bazett House, the Frank Lloyd Wright house that Eichler once rented. And drawing on her broadcasting background, she’s directed a documentary film about the real estate developer.

People in Glass Houses: The Legacy of Joseph Eichler will have its Peninsula debut on Saturday, September 29, at 11:00 am in the Menlo Park Council Chambers, 701 Laurel Street. The screening is free and open to the public. Monique will be on hand to answer audience questions.

“I love the architecture of Eichlers,” she says. “I view it as an art form, as an avenue of self-expression.” 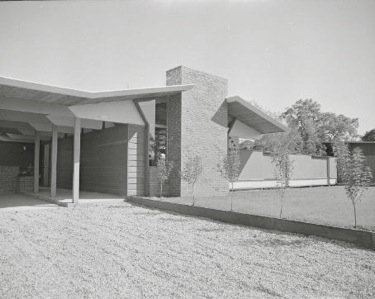 Eichlers, built between 1947 and 1974 when Eichler died, are mostly one-story houses of about 2,000 square feet with glass walls, post-and-beam construction, and open floor plans. The exterior features flat roofs and vertical 2-inch pattern wood siding, with straight geometric lines.  There are about 50 Eichlers in Menlo Park (two are pictured) and 20 in Atherton.

“I’ve noticed the emotional attachment people have to Eichlers, how much these homes mean to people,” Monique says. “But I found there was no footage of Joseph Eichler or his homes. I wanted to fill that void. What he did was so innovative and he opened doors.

Monique spent four years searching for Eichler homeowners throughout California and interviewed residents who live in nine different Eichler communities from Sunnyvale up to Marin County as well as Castro Valley in the East Bay. Her goal was to showcase the homeowners who share a sense of pride in living and caring for their homes and their neighborhoods. The resulting 40 minute film was produced and financed by Monique at a cost of $30,000.

The Menlo Park screening is supported by the Friends of the Menlo Park Library. Free wheelchair accessible van service is available for Menlo Park area seniors and people with disabilities. Call 330-2512 for van reservations.

If you can’t make it to the talk but would like a DVD, Monique is working with a company to fulfill orders.