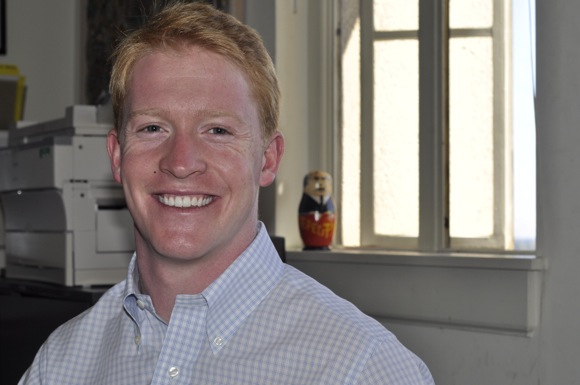 Graduate from Stanford with honors in June  — check. Get a job that comes with a 12th floor office in Hoover Tower — check. It’s no wonder that Jack Mosbacher is smiling.

The Menlo School grad grew up in Woodside with Stanford Cardinal blood in his veins. Granddad Jack Ditz started the Buck Cardinal Club. Mom, Nancy Ditz (a marathon runner who competed in the 1988 Olympics) and Dad, Bruce Mosbacher, are also Stanford grads.

But, that lineage did not lead him to his lofty office with a view. Nor was it that heritage that initially lured him to the Farm. Instead, it was the chance to play baseball for Coach Mark Marquess. “He gave me the opportunity to come here,” said Jack. “I played for three years but am the first to admit that my playing days were far from impressive.”

Jack had noticed other former athletes wandering around campus trying to figure out how to fill the 30 hours they’d been given back to their week. “I hadn’t come to Stanford just for baseball,” he said. “I really wanted to take advantage of all the academic resources available at this amazing place.

“I’d always liked the idea of exploring policy making or some other kind of public service. I believe finding ways to do innovative things is a huge challenge for my generation.”

Jack had the good luck of having Condelezza Rice as his undergraduate advisor, which meant for him, that even with his athletic career, academics were always on top of his mind. Then with his baseball playing days over, he stumbled into a class taught by Larry Diamond (who’s lofty office he now shares) called Democracy, Development, and the Rule of Law. [Note, there is a Center on campus of the same name.] It was co-taught by Katherine Stoner-Weiss, who he also cites as a major influence. He applied for and received a grant as a undergraduate.

That led him to travel to Uganda in the summer of 2011 where he conducted his first research project that focused on how a developing country deals with natural resources that could have a major (or not) impact on the country’s economy. His resulting thesis project was honored as the CDDRL Department Best Thesis Award.

Now ensconced for a year as a Research Assistant to mentor Larry Diamond, Jack realizes his good, but well-earned, luck. “People here are creating knowledge that makes the world a better place,” he said. “I had a stereotype of academics doing research that didn’t always translate into making a difference. But, now I see academics dedicated to the shared belief in the universal value of democracy. And, they are making a real difference around the world by putting research into practice.

“I am really passionate about all of this. There are so many things happening in the world that are underreported. The worst tragedy is the inequality of opportunity. That is something I believe my generation must tackle.”