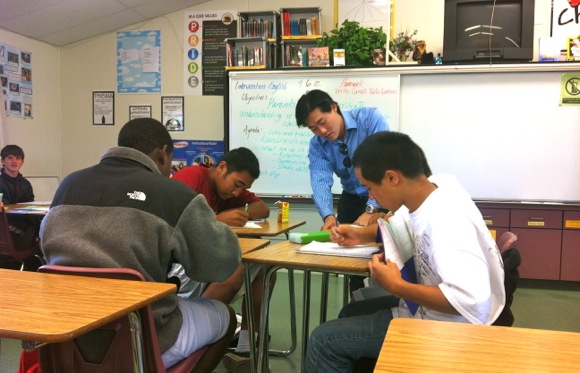 For the past few seasons, the Menlo-Atherton High School football team has been performing extremely well, making it to the finals of their division last year. However, the players are not just performing well on the field, but in the classroom as well, partly because of a team-wide, pro-bono tutoring program instituted by a local educational consulting company called Cardinal Education.

Cardinal Education’s mission is to help students throughout the Bay Area achieve and exceed their academic goals, as well as guide students through the college application process. For the past six years, every player on the M-A football team has benefitted from Cardinal Education’s services, learning valuable skills and study habits that have propelled their academic growth.

In his explanation about how he started the program, Allen Koh, founder and president of Cardinal Education, explained, “I initially got involved because I had two paying students who were visibly upset that the team was going to lose in the first round of the CCS playoffs because they had lost so many players to academic ineligibility toward the end of the season.  These two students moved me to step up and sponsor the M-A football teams.”

Cardinal Education brings a variety of professional tutors to M-A, who assist athletes with their schoolwork, study habits, and time-management, all of which are key in maintaining the appropriate grades to play football. The amazing part of this program is that Cardinal Education does it for free; they just want to help the football students achieve their academic goals.

“The initial goal of the program was to ensure that all the football players have a high enough GPA to maintain their academic eligibility for athletics. Our goals have evolved to ensure that every boy have the grades and preparation to go to college,” said Koh.

“With the encouragement of the coaches, parents, teachers, and administrators, Cardinal Education remains committed to this program to help the boys be winners off the field,” said Koh.

This year, the football team has a promising start. However, with the help of Cardinal Education, their focus will be on academics first.