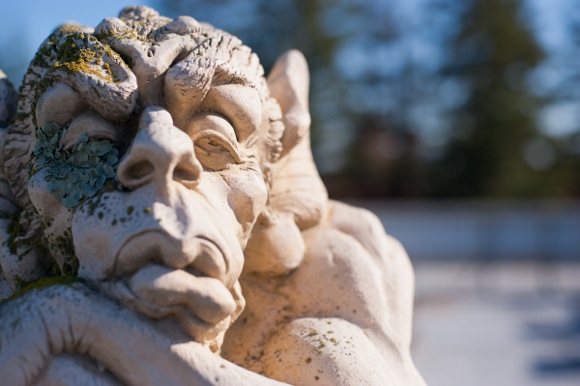 For the past 15 years, two small, grotesque statues have spent their days squatting on the roof of Building 280B on the SLAC campus in Menlo Park, peering out over the cars in Parking Lot G. No one is quite sure how the two stone gargoyles reached their perches — or if they are, they’re not telling. 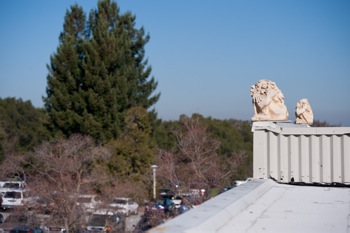 But the general consensus on what drew them to that particular spot was the 1996 addition of earthquake supports to the outside of 280, the Physics and Engineering Building. The supports took the form of flying buttresses, made famous by examples of Gothic architecture all over Europe. While gargoyles have adorned buildings all over the world for thousands of years, they are probably best-known for their brooding presence on medieval cathedrals such as Notre Dame in Paris.

Wherever they came from and whatever enticed them, the 280B gargoyles are not going anywhere anytime soon, says Raj Sharma of SLAC Facilities Maintenance and Fabrication. One of Sharma’s areas of expertise is roofing, and when he inspected them after their mysterious appearance, he declared himself satisfied.

“They’re very safely bolted on,” Sharma said. “Whoever did this knew what they were doing.”

The earthquake supports added to Building 280 do indeed look very much like the flying buttresses associated with the Cathedral of Notra Dame. This gave Tom Himel, a SLAC physicist, and his colleague Bruce Frederick the idea to add the gargoyles to provide additional protection for the building. So far they’ve done their job. Tom says the gargoyles were ordered from Design Toscano. A second whimsical object, known as “The Rock,” is on display in front of Building 41, the Administration and Engineering (A&E) Building. More on that later.

Funny! All my years at SLAC, and I never noticed the gargoyles. Have to look for them next time. Thanks, Jym!