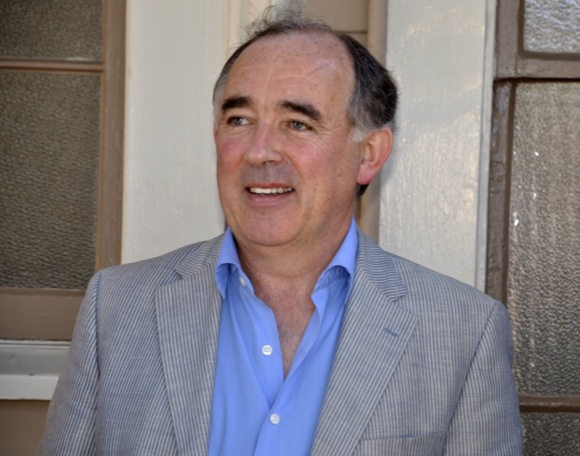 Gerry Hanley of Galway City, Ireland is visiting Menlo Park today, making a stop at the historic train station before lunching at the Menlo Grill. His visit is being hosted by the Menlo Park Historical Association, and one possible topic of discussion is forming a sister city relationship between Galway and Menlo.

In the spring of 1988, Menlo Park City Council member Peg Gunn took a four-week vacation to Europe, which included a pre-arranged visit to Galway City. Gerry Hanley was part of the civic group that met with her. Peg was a member of the City Council from 1980 through 1988 and Mayor twice — in ’81-’82 and again in ’83-’84.

The City of Menlo Park has Irish roots: In the early 1850s, Irishmen Dennis J. Oliver and D. C. McGlynn, whose wives were sisters, purchased 1,700 acres (some accounts indicate only 640 acres) extending north from  San Francisquito Creek and west from County Road (now El Camino Real), apparently with the idea of raising cattle. They named their ranch “Menlo” after their birthplace in Ireland and erected a tall wooden gate with graceful arches on which they inscribed the name “Menlo Park” and the date “August, 1854.” The gate, which was destroyed by a motorist in 1922, seems to have been modeled on the gate to Menlo Castle. 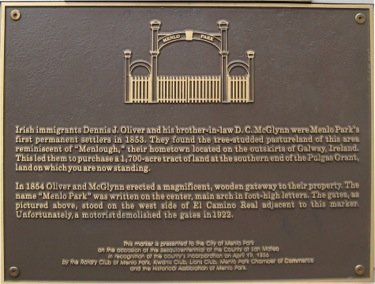 In 2006, a bronze plaque honoring Oliver and McGlynn was mounted on the south side of the building at 863 El Camino Real in Menlo Park, close to the location of their gate. Menlough (sometimes shortened to Menlo) is the phoenetic translation into English of Mionloch or Mion Loch, which means “small lake” in Gaelic. In the 19th century, Ireland was part of the British Empire, so these translations were already incorporated in the survey maps and registry documentation with which Oliver and McGlynn would have been familiar.

Menlough is often shortened to Menlo to distinguish it from another Menlough village in another part of Galway County. Also, Menlo Park is a particular area within Menlo called a Townland. Ireland’s Menlo is not now a town in itself, but rather has been within the official boundaries and administration of Galway City for about 25 years. Located by the River Corrib, it is rural in character and full of history; development is limited in an effort to preserve its character. Hence, there are no shops, bars or supermarkets within its area. The current deputy Mayor of Galway lives in Menlo.

Menlo Castle was one of the ancestral homes of the Blake family, one of the Tribes of Galway from c1600-1910. Beautiful photos of the Menlo Castle and gate taken by Menlo Park resident Patrick Killelea in 2011 are posted on InMenlo. A photo of the main gate of Menlo Castle is in the July-Sept., 2010, issue of The Gate Post. A summary of the origin of the name “Menlo Park” in California and its relation to “Menlo” in Galway and “Menlo Park” in New Jersey is given in the April-June, 2011, issue of The Gate Post.