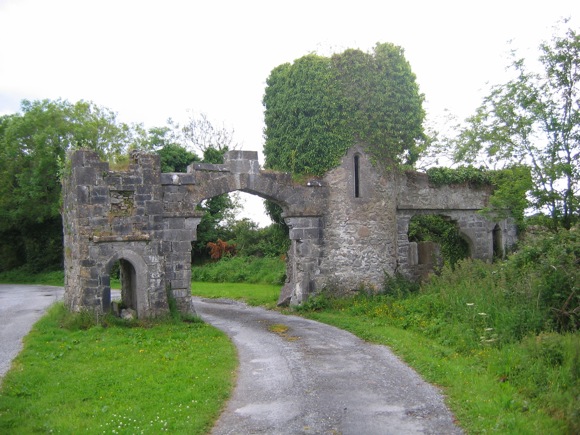 Editor’s note: InMenlo reader and Menlo Park resident Patrick Killelea did some on-the-spot reporting about the Irish Menlough — from which Menlo Park got its name — during a trip to Ireland. Here’s his account.

I’ve solved the mystery of “which is the real Menlough?” – there are actually two such places in Ireland. I’m in Galway City doing some research for a family reunion, and I walked out to Menlough, which is about five miles north of Galway City, and took a bunch of pictures.

The road out there is narrow and rather dangerous because of the traffic. On the way back, thank goodness, I got a ride from a

guy named Brian Connolly on his way to hurling practice. I told him I was from Menlo Park in California, and he told me that he had just been to McGlynn’s cottage, where people still talk about how he and Mr. Oliver got rich in California and founded a town there. (More about McGlynn and Oliver here plus there’s an article by InMenlo contributor and Menlo Park Historical Society member Jym Clendenin in the April-June 2011 issue of The Gate Post.)

He said the other Menlough, out in the countryside, was not related and just happened to have the same name, which is Mianloch in Irish, meaning “little lake.”  Even on the maps here, Menlo Castle (bottom photo) is sometimes spelled Menlough and sometimes Menlo. There’s just a little lake, the ruined castle, and some new housing developments. That’s about it, no city center that I saw.

By the way, note the resemblance of the Menlo gate erected by Oliver and McGlynn (black and white photo) to the gate (very top photo) of Menlo Castle. Galway’s Menlo Park Hotel also has a restaurant named “Oliver and McGlynn.” 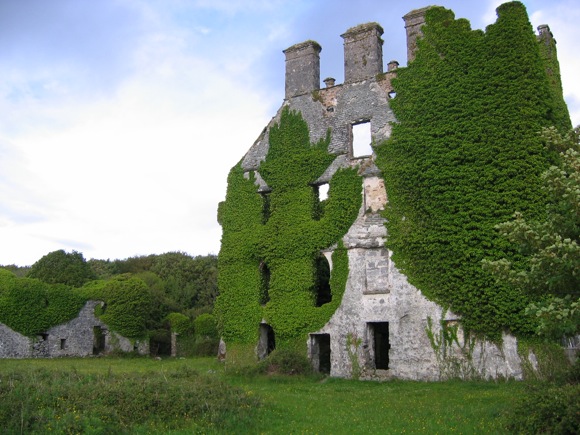 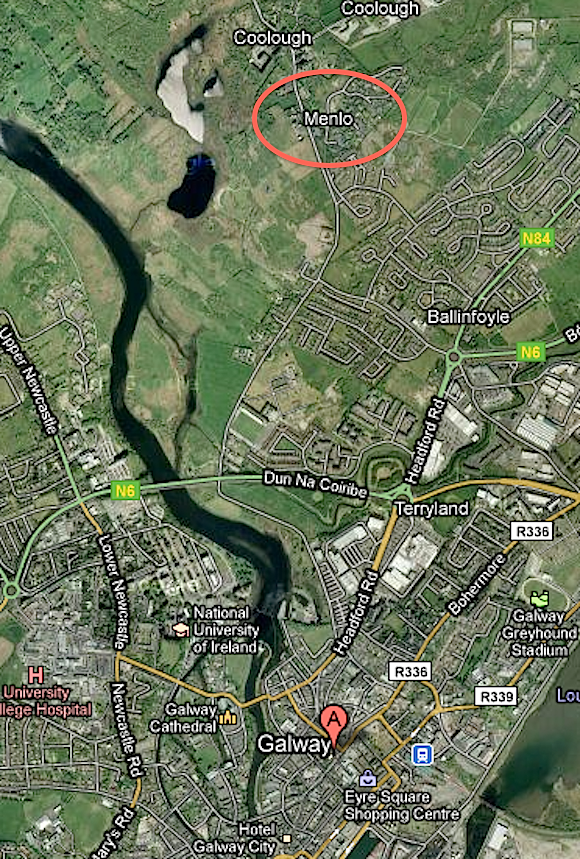 A very interesting story and great pictures to add to the facts and lore about the early days of Menlo Park.

Dear Jym do you know the origin of your name

I am reminded by fellow MPHA Board Member Lydia Cooper that pictures of the Menlough Castle (main gate and front view of castle) were recently published in the July-September 2010 issue of The Gate Post. If you’re interested, go to http://docs.google.com/viewer?a=v&pid=sites&srcid=ZGVmYXVsdGRvbWFpbnxtcGhpc3RvcmljYWx8Z3g6NDY1MmM1NzkzNzQ3NTZiNQ . For information on joining the Menlo Park Historical Association (MPHA), go to http://sites.google.com/site/mphistorical/home .

So that was all just a re-discovery of the known connection between our Menlo Park gate and the castle gate. It was exciting for me anyway!

And Patrick, your pictures and your story stand on their own as first class. Thank you for sharing.

Originally from Dublin, Ireland I am also a Menlo Park resident and recently visited Menlo with my 6 year old son Ryan. I spoke to a very senior gentleman in Menlo who recalled the Oliver family and shared some stories of their homeland. Could you confirm that the location of the original 1854 gateway in Menlo Park is at El Camino Real and Middle Ave ? Did Safeway place that 4-column structure at the corner of their lot intentionally to symbolize this ? Please let me know if I can offer any information on Ireland or Irish language or culture.

My wife says there’s a plaque about the gate, at the Starbucks on El Camino just a couple of streets north of Safeway.

I doubt Safeway would care enough to mark anything historic.

An article about the plaque that honors the Oliver-McGlynn gate appears in the April-June, 2011, issue of The Gate Post (newsletter of the Menlo Park Historical Association). The location of the gate was indeed a couple blocks north of Safeway. You can download a copy of the newsletter (in PDF format) from http://sites.google.com/site/mphistorical/home/the-gate-post .

hi there im from menlo and menlo in irish is menlough. to see photos and stuff about menlo have a look at my facebook page i love menlo.

Menlo (Galway), is said to have had, a House for each day of the year, before the ravages of the Irish Famine, and its Emigration effects.
Houses were small then, and known as Bothans.
There is a map from the 1840’s, which shows these, at http://www.castlegar-galway.com/menlo-galway , and Google (or, Flashearth – http://www.flashearth.com/?lat=53.302376&lon=-9.072407&z=16.4&r=0&src=msa ) will provide a modern one, for comparison. The old map, already mentioned, has the older name of Menlough, marked on it, also.
Menlo, had a large population back in the day, when compared to its fellow Townlands, mainly due to its position by the trade artery known as the Corrib River – this river connected Galway to other Towns and Counties indeed, by The Corrib Lake. Trade, such as it was, could be more direct by water than by road.
Like having a Mall in America, a Castle in Ireland, always helped to concentrate populations.
See Menlo Castle on Youtube – http://www.youtube.com/watch?v=BnvRGuSUeQw
and a little more personal detail – http://www.castlegar-galway.com/menlo-castle-with-photographs

Hello,
My ancestor, Louisa Blake left Menlough Castle in 1863 to come to Melbourne, Australia. I visited the castle a few years ago. Pity it was once burnt down. Lovely day, though. Louisa’s first husband was shot by two bushrangers who were later hanged.

Hi Janet,
I presume, that Shana is a Relation also? See http://www.youtube.com/channel/UC8dHEuxmWfQCZwFJaVX2y_A
And Australia – what a compressed (written) History, if that is at all likely?

Good Luck, in Aussie – the Galwegians and Irish, are there again,

hi Janet – I live near Menlo Castle and I have been to Menlo Park California and I have also been to Melbourne – my daughter lives there – I found a website there for a Blake – photographer….. I would really like to correspond with you on our shared heritage:
gerryhanley@gmail.com

Well I am in Melbourne. Google “Shot For Gold” which is about the bushrangers and their hanging!

In Thomas Campbell Foster’s “Letters on the Condition of the People of Ireland,” Foster visits Menlo (he spells it Menlow) in mid-October of 1845 (on the eve of the Great Famine) and describes it as an ideal example of an Irish Rundale village: “It contains about two thousand inhabitants, and their chief subsistence is derived from supplying Galway [City] with milk. The inhabitants keep great numbers of cows, which they feed principally on grains bought in Galway” (292-3). Foster continues: “The way through the village is the most crooked, as well as the most narrow and dirty lane that can be conceived. There is no row of houses, or anything approaching to a row, but each cottage is stuck independently by itself, and always at an acute, obtuse, or right angle to the next cottage” (293). He continues: “As this is the largest village I ever say, so it is the poorest, the worst built, the most strangely irregular, and the most completely without head or centre, or market or church, or school, of any village I ever was in. It is an overgrown democracy. No man is better or richer than his neighbour in it. It is, in fact, an Irish rundale village” (293). Foster was a barrister and reporter for the London “Times” as well as a Yorkshire-born Englishman. He was unabashedly pro-“Saxon” and anti-“Celt” and his prejudiced Times letters had a large impact on British policy during the Famine unfortunately.

Was the Menlo Park in New Jersey also named for Menlough?

Here’s the scoop from a member of the MP historical association:
Thomas Edison established his laboratory in Menlo Park, New Jersey. He bought his East Coast property in 1876 from a failed subdivision that had been named Menlo Park by developers. They chose “Menlo Park” as it was a well-known enclave in southern San Mateo County, home to several large estates owned by wealthy San Francisco and Peninsula residents. For his inventions, Edison became known as the “Wizard of Menlo Park (New Jersey).” (From “Edison Way” in The Streets of Menlo Park, published by the Menlo Park Historical Association, November 2017. Copies available directly from MPHA, see website, or from Kepler’s bookstore. Information found in The Origin of New Jersey Place Names, New Jersey Public Library Commission, May 1945, p. 20)