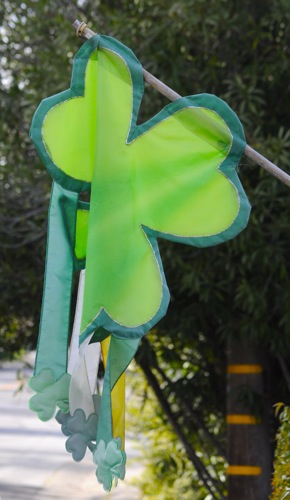 St. Patrick’s Day is a good excuse to dust off some historical facts that tie our city of Menlo Park with its Irish predecessor. We are indebted to the thorough research done some 35 years ago by Stanley Pearce who was compiling a history of Menlo Park’s  Trinity Episcopal Church and, in doing so, recorded the town’s earliest beginnings. Here are Mr. Pearce’s word from his book Lift Up Your Hearts:

“In seeking to immortalize themselves, the sentimental designers of the ornate gateway had intended that ‘Menlough’ (a Gaelic word meaning ‘Lakeside’) would go on one side of the keystone and ‘Park’ on the other. However the itinerant sign painter engaged to do the lettering immediately demonstrated the lopsided appearance that would result, and Oliver and McGlynn were faced with making a decision. The keystone was already in place; moreover, it set the whole thing off, and certainly the date was essential. They finally were driven to sacrifice the spelling of their beloved home town in Country Galway for the phonetic spelling, ‘Menlo.’

“Oliver and McGlynn’s trinity of arches was by no means the only entrance to their ranch. For at least another decade no other structure was in sight to the north or to the south along the unfenced frontage of the lonely stretch of rutted trail that would not gain the regal title, ‘El Camino Real,’ for many years yet to come. The gate was a monumental landmark only. However, it was in its vicinity that the first houses were built edging the county road between pathways that later became Santa Cruz and Oak Grove Avenues.”

My mother Mary Glynn comes from Menlough, Ballinasloe, Co. Galway , Ireland. I am so amazed to learn Menlo Park was started by two men from Menlough and one being a Mc Glynn. As the town of Menlough is very small, it is possible my mother’s family and this man Mc Glynn are related.

thats not the same menlo. sorry

There are two Menlough’s in Galway County. One is a small farming village far from Galway City. The other is now incorporated into Galway City and is now purely residential and somewhat prestigious. To distinguish the 2, the latter is usually shortened to “Menlo.” No one seems to know where Daniel McGlynn’s family came from, but we do know that they migrated to NYC when Daniel was quite young. On the other hand, we do know that Dennis Oliver migrated to NYC without his parents when he was in his early 20s. He quickly connected to the McGlynn’s and married Daniel’s sister. They migrated to SF in ’49-50. More details can be found on the website of the Menlo Park Historical Association, https://sites.google.com/site/mphistorical/home. Click on Dennis Oliver in the left side-bar where you can find, among other things, a photocopy from his diary detailing why he named his ranch “Menlo Park.”