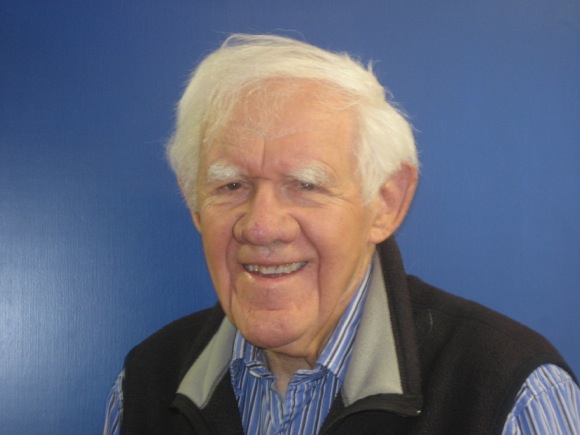 For the first time, Pat Keller, a 93-year-old competitive swimmer and practicing architect in Menlo Park will see himself on the big screen in the documentary Age of Champions, which is being shown on Monday, Oct. 22 at 2:00 pm.  The film was shot primarily at Stanford University during the National Senior Olympics and features a 100-year-old tennis champion, 86-year-old pole vaulter, and basketball grandmothers.

Keller will be joined by the film’s director, Christopher Rufo, and be available to answer questions. The screening is being hosted by Moldaw Residences, part of a grass roots campaign to share the documentary with the public.  The filmmakers are taking it to senior centers and senior living communities for a reason.

“This highly inspirational film proves that you can follow your dreams at any age,” said Gerry Vadnais, executive director, Moldaw Residences.

Added director Rufu: “Before we made the film, we thought the secret to staying fit as you age had to do with good genes or eating healthyWe discovered that a strong sense of community and encouragement are actually the secret ingredients. We hope this film encourages seniors to live a healthy lifestyle and enjoy the community atmosphere around them.”

Keller works out for an hour four days, and said he plans to keep exercising as long as possible.

“It feels good to compete,” he said. “You are nervous beforehand, but you feel great when you do it.  I hope the movie inspires people to start exercising. I don’t feel my age.”

Moldaw Residences is hosting the screening in the Albert & Janet Schultz Cultural Arts Hall, Freidenrich Conference Center on the Taube Koret Campus for Jewish Life (899 E. Charleston, Palo Alto). Those interested in viewing the film should R.S.V.P. by calling (800)873-9614 or by emailing Naazmin Khan at nkhan@moldaw.org.