Allison and Clint Chao: They’re all in for Menlo Park/Atherton schools 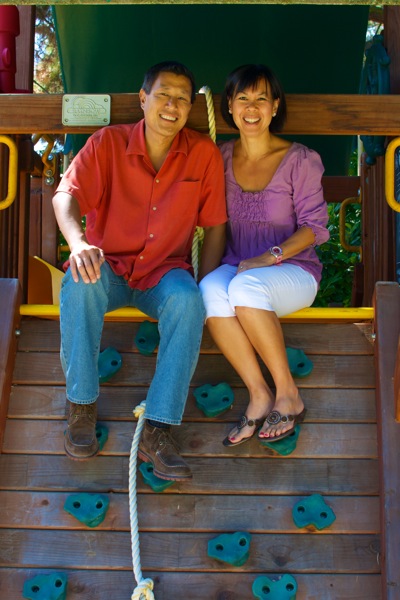 When Allison and Clint Chao moved from the East Bay to Menlo Park, they did so “because Menlo Park is renowned for its schools and as a great place to raise a family,” according to Clint. And, while they moved three times on the same street before “settling in for good” at their current west Menlo home, they’re not changing their minds about the local schools — they’re all in.

Allison is currently PTO president at Oak Knoll, where their two daughters attend. Clint is serving as co-president of the Menlo Park Atherton Education Foundation.

“I first got involved in the community when I joined the Parents Club of Palo Alto and Menlo Park,” said Allison, who worked on the finance side of startups before she chose to concentrate on raising her family. “Because of my professional experience, I enjoy managing and making sure committees are staffed and organized. As PTO president, I’m also called on to be the principal’s partner.

Clint has been on the MPAEF board for three years, serving this year as co-president with Scott Hinshaw. “It seems important to me to lend my time and talents to school-focused organizations while my kids are going through public schools. The Foundation is responsible for raising money for the District and raising money is something I do professionally. [Clint runs an early stage VC].

“We are continuing to see funding cutbacks at the state level, but that’s something we can’t control. But we can make an impact on the quality of education our kids get. And that’s certainly where the Foundation’s work makes an impact.”

MPAEF’s goal is to raise $4 million during the 2012-13 school year. “We hope to get an 80% participation rate in contribution from families and also support from the community at large,” said Clint.  “We’ve long had support from residents whose kids went through the public schools — and that’s been great.”