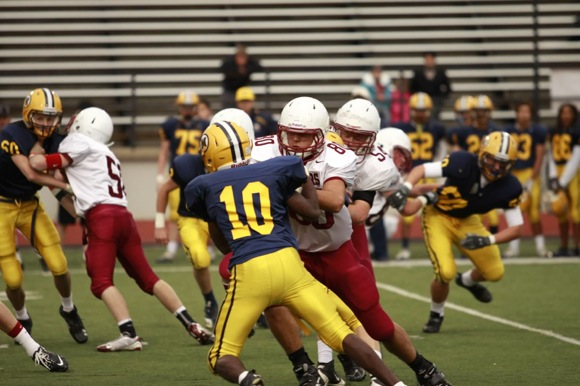 Back in the day, Sacred Heart Prep and Menlo School did not compete on the gridiron. Shortly after 9/11 when all football games were cancelled, it was proposed that the two neighbors compete. Tim Deppmeier of Sacred Heart, Craig Schoof of Menlo, and other boosters and supporters created the Valparaiso Bowl. The first game was played at Menlo. The next year SHP hosted at Woodside — and a tradition began.

Since both Sacred Heart and Menlo were Peninsula Bridge sites, students from both schools were Bridge alum, and many students from both served as Teacher Assistants, Matt Moran proposed that proceeds from the game should go to support Peninsula Bridge. This year the ValPo Bowl will be held at Woodside High on Friday, Nov. 9. The JV game is at 4:00 pm, and the Varsity plays at 7:00 pm. Tickets are $10 for adults, $5 for children, under 5 free.

Peninsula Bridge has changed the lives of nearly 6,000 motivated middle school students from under-resourced communities since Menlo alum Les DeWitt and a group of committed individuals held the first summer program on SHP’s campus in 1990.

Last year’s Valpo Bowl was the Game of the Week on KTVU. After the Knights prevailed, Menlo Coach Mark Newton was named Coach of the week by the 49ers Foundation and awarded $1,000; he donated his award to Bridge.

This year is PB Valpo Bowl X. Though opponents on the gridiron, both Menlo and SHP are thrilled that all the proceeds from their contest go to benefit Peninsula Bridge. Since its inauguration, close to a quarter of a million dollars has been raised to support Bridge.