Then and now: Alice MacCorkle and Greg Burns, still laughing after all these years 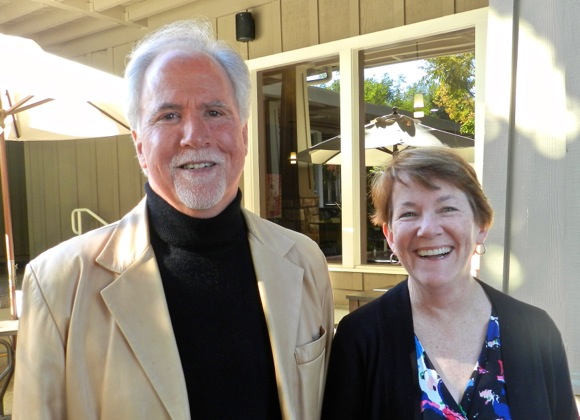 When Alice MacCorkle (Carrott) and Greg Burns graduated from Menlo-Atherton High School, they were voted as having the best laughs. What exactly that meant is unclear these “just-a-few” decades later. The good news is that they are still laughing — and recently got together over brunch in Menlo Park with some mutual friends. 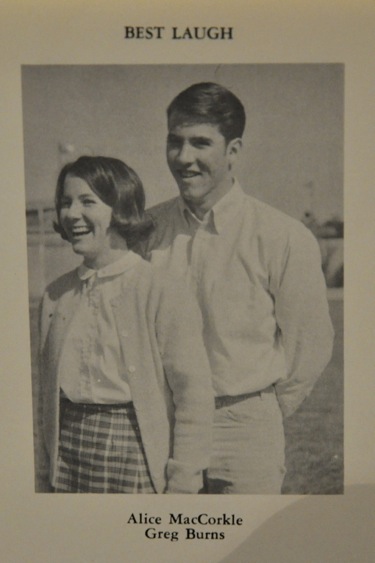 Greg was an All-League water polo player and “passable” swimmer (backstroke) during M-A’s glory years, coached by Bob Gaughran along with teammate/Olympian Dick Roth. After graduating, he attended Menlo College, getting his B.S. from San Francisco State University. His first job was working with heroin addicts returning from Vietnam. He then worked as a child/adolescent psychotherapist, and later became the drug and alcohol treatment coordinator at a locked psychiatric facility in San Jose.  He’s now a professional and executive coach in Los Altos. He likes what he’s doing and is a bit proud that he’s decidedly “non-tech,” which means, in part, that he has no website just an old-fashioned phone number: (650) 917-0869.

While Greg was in the water, Alice was on the sidelines. During her senior year at M-A, she was head cheerleader. Like Greg, she’s a kind of coach. For the last 12 years, she’s worked at the University of Kansas Medical Center helping med and nursing students navigate their way through their studies, even if they have learning disabilities. Her current title is Director of Education Support Services. She landed in Kansas City via Boulder (she graduated from the University of Colorado) and a bunch of other middle American towns not typically on the radar of West Coast folks, like Jefferson City, Missouri. She’s the mother of three and grandmother of four.

Asked what makes them laugh today, Greg said, “My animals” and Alice said, “You have to be able to laugh at yourself!”