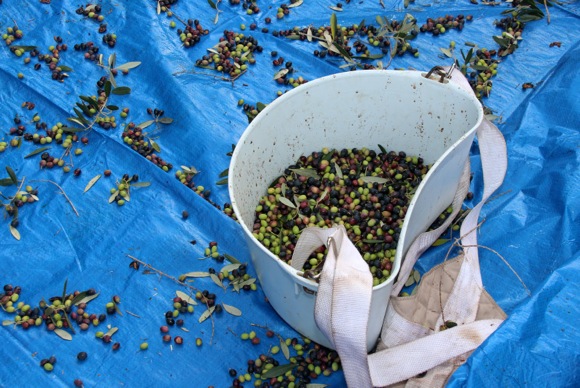 Since 1898, more than 50 heirloom olive trees have lined the western edge of Sacred Heart Schools’ campus along Elena Avenue in Atherton. In the early part of the 20th century nuns tended the trees and harvested the olives, but as time went on, the trees became less of an agricultural crop and more of a just another part of the campus landscape.

The result: Every November the plump olives ended up on the ground, got smashed and were tracked into the classrooms, often leaving behind a mess. But thanks to a group of parents, that’s no longer the case. “I remember driving on campus to pick up my son and wondering why we weren’t using the olives,” said Nancy Sallaberry, a former SHS parent. 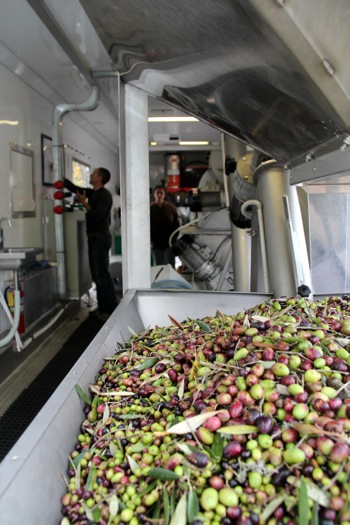 Nancy and husband Paul (pictured below) just happened to know something about olive harvesting and producing. Realizing that there was much to be learned and gained from the olive trees on campus, Paul teamed up with another parent, Stewart Slafter. Since 2008, they’ve helped spearhead a weekend of olive picking and crushing in mid-November. The resulting oil is then bottled on campus and sold as a fundraiser for the high school’s athletic Boosters’ Club at the SHS holiday boutique, which will be held this year Dec. 5-7. [Note: there was no harvest last year due to weather.]

“The trees on campus produce about 2,000 pounds of olives a year, which translates into about 400 bottles,” explained Paul. “This year we may be  closer to 2,400 pounds and 500 bottles.

“The quality of the oil is excellent, and the demand has always been high. But what’s really great about the event is that it evolves the entire school community — students, parents and alums are get involved, and not just with the harvesting. Art students design the label. It’s a unique program, particularly for an urban school.”

This year’s harvest featured a mobile olive press — Olive to Bottle — (pictured right) and the participation of Dan Flynn, Executive Director of the UC Davis Olive Center, who talked about the important characteristics of quality olive oil and what impacts the taste. SHS chef Michael Schley was also on hand to do some cooking demonstrations. 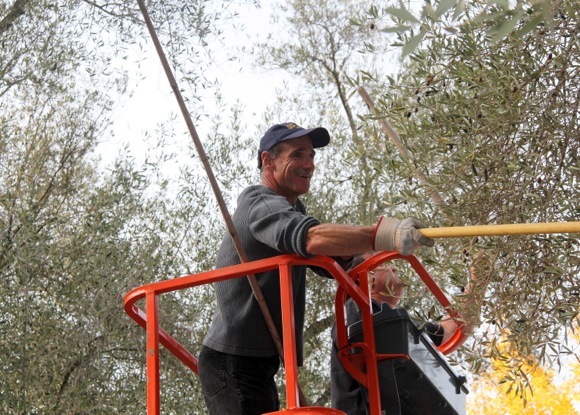 Dear Olive growers, I am planning to start an urban olive grove in South Africa to create jobs and income inflow into poorer communities. I see it as being associated with a skills development/leadership program as well as providing dignity and employment for destitute people, in which the olives provide both wage income and a few bursaries for studying urban farming, horticulture, and related subjects. The groves will be community owned and I hope to involve the youth and retired people in the organization, propagation, tree care and harvesting. I am writing to see if you would like to share knowledge and experience with us, as we will be just starting out and you may be able to help us hit the ground running by pointing out problems with the logistics of harvest in an urban space and such issues. I’m calling the first open meetings in communities in January 2015. Everyone with whom we can network, or from whom we can just even receive encouragement will add to our energy. So from a fellow olive-activist, greetings, I love what you’re doing ….Yours sincerely, Caroline Kloppert.