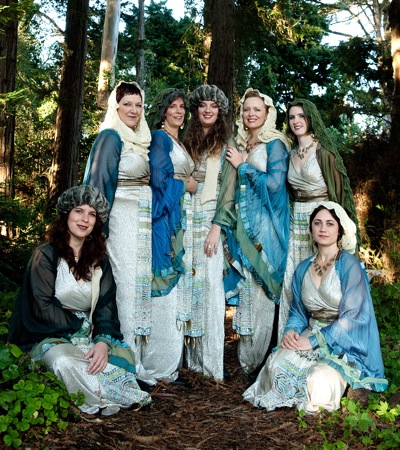 Kitka’s commitment to expanding the performance unusual songs from Eastern Europe has over the years led its members on numerous research trips overseas. This year for the first time, however, the ensemble has broadened its repertoire gathering process by sourcing songs not only from its travels but also from past and present Kitka singers, mentors, fans and a wider circle of Eastern European immigrant families living in the United States. Almost a third of the songs in the Wintersongs program this year are brand new to the ensemble, having been suggested through this crowdsourcing model.

“What has and will always remain the same,” says Kitka vocalist and Wintersongs Project Co-Director Michele Simon, “is the fundamental need to gather together at this darkest time of the year to raise our voices in song.  It’s something humans have probably done since the time we lived in caves, first praying for the return of the sun.  Now, whether we’re following a religious holiday tradition or simply celebrating friends, family and food, the impulse is still the same.”

Represented in the program are songs celebrating the Christmas holiday and the coming of the New Year, as well as a salute to the Chanukah treat of latkes.  The concert also showcases non-religious songs of wintertime despair and mourning, as well as songs of merrymaking; songs spanning the Balkans, Russia, Belarus, Ukraine, and Georgia; songs from Christian, Jewish, Muslim and pre-Christian traditions.  The resulting tapestry of sound is a richly interwoven exploration of winter.