Fans of chef Guillaume Bienaime can find him at Portola Kitchen 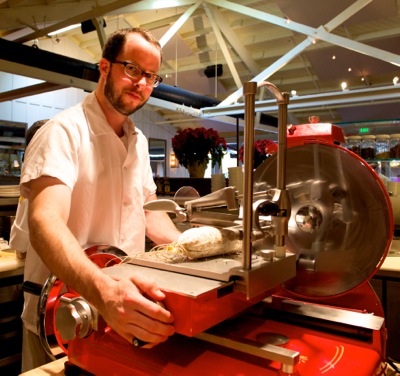 In his two years as Executive Chef at the now-shuttered Marché in downtown Menlo Park, Guillaume Bienaime managed to garner a number of accolades and a loyal following. Local fans don’t have to go far to sample his cooking. He’s now heading the kitchen, and other responsibilities, at Portola Kitchen in the Ladera Country Shopper on Alpine Road.

His Italian-inspired menu is casual, not fine dining as it was at Marché, and that’s just fine with him. “We’re still tinkering with the menu some,” he says, “but we’ll eventually move to a more seasonally-changing menu rather than weekly. The wine list is a mix of Italian and Californian, with local wineries such as Fogarty, Varner and Woodside. Owner Mike [Wallau] and I really want to create a place with the neighborhood in mind.”

Guillaume, who was born in France but raised in the States (moving between the East and West Coasts), has been cooking since he was 15 and worked in a pizzeria. “My parents moved to Palo Alto the second time when I was a senior in high school,” he says. “I followed them a year later and went to Foothill for two years before deciding that I wanted to pursue a culinary career. I graduated from Johnson and Wales with a degree in Food Service.”

Along with a new menu, Portola Kitchen sports a new look featuring rough-hewn wood and more subtle lighting than when the space was Mike’s Cafe. The transition has met with approval. Guillaume says prime time dinner reservations are essential, and a recent lunch time visit revealed every table full. “We are only here because of the surrounding communities and are thankful to have such supportive customers.”

“I do love cooking Italian,” he continues. “When I’m home, sometimes I cook things you can’t get in a restaurant, like fondue or a whole roast. Good dishes are always the results of good products.”

Portola Kitchen has been open since July, and Guillaume has one firm goal: “I want to make this a very successful neighborhood restaurant and have it running well.”