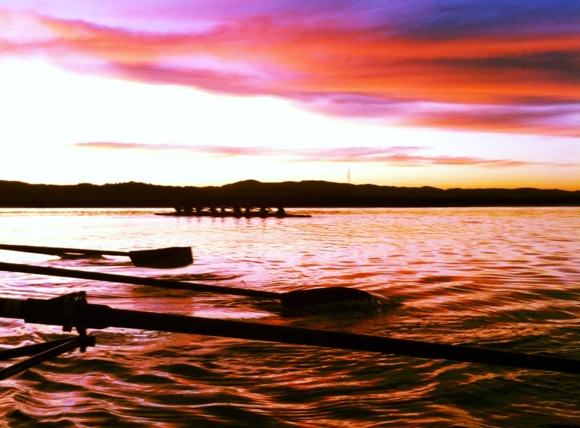 Editor’s note: If you pass Fremont Park  in downtown Menlo Park tomorrow (Dec. 2) between 8:00 am and 2:00 pm, you’ll likely spot Norcal Crew staging an erg-a-thon, the goal of which is to row at least one million meters and raise $45,000. NorCal Crew is one of the crew clubs that are active locally; M-A student Katie Gaherty reports on the sport.

Rowers do more physical activity before 8:00 am than most people do all day. For rowers or coxswains, rising at the crack of dawn is a part of the daily routine.

Defined as a sport in which 1-8 rowers row in a long boat, engaging their arms, back, abdominals, and legs as they pull the boat across the water, crew requires effort, patience, determination, and commitment. Because it requires a rigorous team effort, crew creates strong friendships while developing athletes.

“With crew, I am able to work hard and compete against myself to reach my own goals and expectations,” says M-A junior Eduard Cornew.

“Crew is one of the only things that I’ve ever done where I’ve felt truly part of a team,” adds Becca Tse, a coxswain for NorCal Crew, “You spend every living breathing moment with those in your boat. And when you’re working together, nothing can stop you.”

As the rowers pull the boat along the water, they face opposite from the direction in which they are going; therefore, they need assistance in direction and commands. This is where the coxswain comes in. Coxswains are coaches of the boat. They not only have to learn proper rowing techniques, but they also need to know the boat, rowers’ strengths and weaknesses, and steering and direction. The job may not demand physical labor, but mentally, coxswains must process a lot quickly and in an efficient manor. It is one of the most important roles in a boat.

“[Rowers] make a connection throughout the boat, from the coxswain to the bow seat and everyone in between,” Tse adds.

The sport offers high schoolers huge opportunities for college recruitment. Rowers and coxswains are highly regarded by many colleges for scholarships, since crew is an uncommon sport  that requires many team players. This gives committed athletes a boost in their college applications. Most colleges require a player who will commit to the team for a year when recruited, unless an injury or medical emergency arises.

There are a variety of local crew clubs that practice on lakes, rivers, or bays, including NorCal Crew, Stanford Rowing Center, and Palo Alto Rowing Center. All of these clubs are located on the port of Redwood City, and look for new participants year round. The season begins in the fall when they start headraces or regattas (5,000 kilometers) and recruit through spring when they begin competitive seat racing or regattas (2,000 kilometers). Many of the clubs set up erg-a-thons where they row on an erg (rowing machine) at a public location to raise money for their team and introduce the sport to others who might be interested.

Rowing or coxing on a crew team offers many benefits for personal and team development. Crew allows you to gain physical coordination and strength as well as leadership and team skills. It is rewarding when a team of 4 or 8 can help each other to succeed in a race. Crew is a sport that does not require prior experience; it is easy to learn with willingness and determination and can lead to worthwhile opportunities in the future.