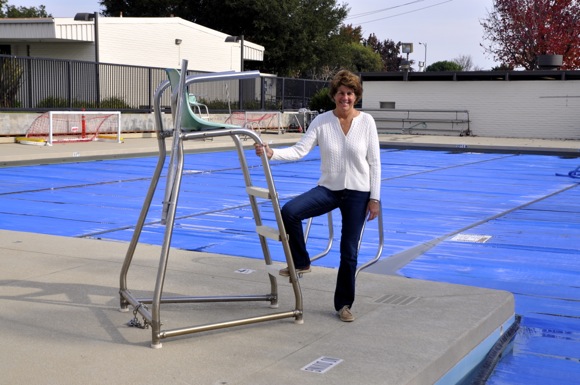 Stay wet long enough and all kinds of ideas can percolate. For Leslie Platshon and three other Menlo Master swimmers — John Goldman, Dave Mandelkern, and Rebecca Pinto — along with some help from Joanne Goldberg and the Alumni Consulting Team at Stanford Business School, that’s translated to bringing aquatics to Menlo Park kids who otherwise wouldn’t be able to take swimming lessons.

“A lot of things came together,” said Leslie, who we met at the Belle Haven Pool in Menlo Park. “My boys all played water polo. There’s a great aquatic facility in the City of Commerce in Southern California, which is kind of in the middle of nowhere.

“Brenda Villa, who plays water polo for Stanford, came out of the program at Commerce. She’s been a role model. A number of us thought it would be great to replicate that program on the east side of Menlo Park.”

The new non-profit they formed is Beyond Barriers Athletic Foundation, which partners with existing providers and facilities that are offering swim programs in underserved areas. At the Belle Haven Pool, the provider is Menlo Swim and Sport, known for its aquatics programs at Burgess Pool.

So far, 36 kids have taken lessons thanks to Beyond Barriers scholarships. The Belle Haven Pool is being kept open this winter, so there will be additional opportunities for lessons.

“We didn’t want to pick up the kids and transport them to Burgess,” explained Leslie. “We want them to be in their own community and get neighborhood support. The idea is that out of the swimming lessons will emerge swim teams and home-grown lifeguards.”

The kids who participate in the program must be between age 3 and 18 and be at the poverty level, as defined by U.S. guidelines.

“I’m really passionate about this, but it’s not just my idea,” said Leslie. “A lot of people have been wanting to do this and the pieces just all came together.

“We want the kids and community to have pride in the Belle Haven facility and eventually have teams from all over Menlo Park competing against each other.”