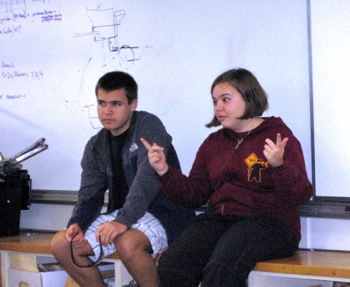 Menlo Atherton High School Team 766 was among the hundreds of teenagers on 50 teams from Bay Area high schools that gathered yesterday  for the announcement of a new robotics game for the 2013 FIRST Robotics season. The M-A team and serveral other area teams brainstormed at Woodside High School in the morning before returning to the Atherton campus to begin planning in earnest (pictured above and right).

FIRST (For Inspiration and Recognition in Science and Technology) anticipates nearly 52,000 students on 2,550 teams will participate in 75 regional and district events around the world this spring. One of those events will be the Silicon Valley FIRST Robotics regional competition April 4-6. Top regional teams qualify for the FIRST Robotics Championships where students compete for more than $16 million in college scholarships.