A place like SLAC — dominated by hundreds of technicians, engineers and scientists, all busy building, maintaining, operating and using some of the most exotic machines in the world — is not ordinarily given over to frivolous activities. But on Wednesday, October 20, 1992, the SLAC community in Menlo Park awoke to find a 1,000-pound spherical rock mounted on the concrete walkway directly in front of the office of the sometimes controversial Assistant Director and Leader of the Technical Division. Just how this came to be is a story oft-told,  and, with years, variously told.

The story begins in 1984 or so when excavation at the west end of the two-mile linac was underway as part of the new SLAC Linear Collider (SLC) project. The excavation had uncovered a spherical rock about 2.5-feet in diameter. This rock quickly became a symbol of a controversy that had developed between the excavation contractor and SLAC higher authorities.

A small cadre of lesser SLAC staff, thinking it might actually be a geode, defied orders to destroy it by hiding it nearby. In the course of the next few years, the rock was several times re-discovered by SLAC authorities, who each time repeated the order to destroy it, which resulted only in its being re-hidden.

At one point, when opportunity arose, a hole was drilled in the rock. Alas, it was no geode, only sandstone.

Finally in 1992, to celebrate his imminent retirement, one of the principals in this saga decided to make a statement on behalf of the free spirit of SLAC. A frame with circular collar for holding the rock was welded together, painted black and a cryptic message (see title if this article) attached. Special long forks for a fork truck were fabricated. 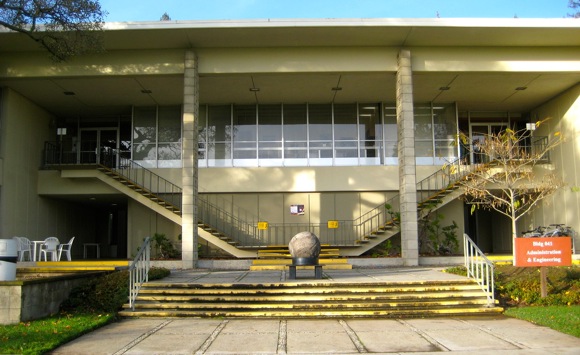 Finally, in a stealthy move late one evening, the Rock  (a name some used for the Leader’s head when he wasn’t around) was planted in a highly symbolic location to be explained. The SLAC “campus” consists of several office buildings and laboratories arranged around a large grassy square near the SLAC entrance from Sand Hill Road.

The buildings all face the square, the one to the west having the office of the Leader on the second floor overlooking the square. The entrance to this building has two symmetrical exterior staircases (see photo above) leading to the second floor at each end of the Leader’s spacious suite. The audacious planting of the Rock in front of this office at the bottom of these stairs was clearly a challenge flung at the Leader. The next morning was anticipated by the conspirators to be a lively one.

What actually happened the next morning is either a lesson in people power or of cool management. The Leader arrived, walked casually past the Rock into his office and drew the curtains. Meanwhile, a “Save the Rock” rally was underway. Flowers were placed in the small abandoned drill hole. Later T-shirts  with the Rock pictured appeared.

There is much speculation as to what went through the Leader’s mind on that day, but the end result is that the Rock took root and is today still resolutely in place.

Author Jym Clendenin, a frequent contributor to InMenlo, is a retired SLAC physicist.