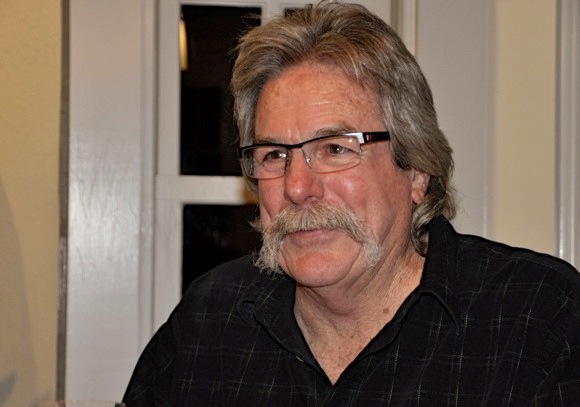 Rob Dell’Ergo is such a San Francisco Giants fan that he can recite momentous events witnessed while attending games with his Dad when he was growing up in Menlo Park, first at Seals Stadium and later at Candlestick. “The memories are endless,” he wrote on his application to join the guest services department at the new PacBell ballpark in 2000. “62 World Series, catching an Ed Bailey home run into the right field bleachers, Mays’ 3000th hit, watching Kruk walk the bases loaded to start a game then gut it out to win it, catching two foul balls in one day…being thrilled by Bonds, both of them, as well as the three Alous and the only Mays, McCovey and Marichal.”

For Rob, the guest services position was putting into practice a new philosophy of life that he developed after being diagnosed and successfully treated for melanoma in 1999 — “live life to the fullest.”

“I’d always loved the team but never really liked Candlestick,” he said, sitting in the kitchen of his Santa Rosa home that he shares with his wife Nancy, who also attended Menlo-Atherton High School. “I thought it would be fascinating and also fun to be part of one of the biggest things that happened since the team moved west in 1958.” [Note: Classmates at Hillview and St. Raymond schools may remember Rob as Bob, just for the record.]

Rob started as an usher and later became a supervisor on the Club level. His son Nick joined him in 2001, when school didn’t conflict. “That was one of the biggest bonuses of doing the job, I got to be with my son for 90 plus minutes every time we worked together,” he recalled.

Out of his experience working at the ballpark, came the book Inaugural Season: The San Francisco Giants and Their First Season at Pacific Bell Park, which was recently accepted into the Baseball Hall of Fame collection, and was also a family project with son Brian revising and editing. “I realized that I had the opportunity of capturing a moment of Giants history whatever the win/loss record was,” Rob said.

While Rob graduated from Arizona State with an English degree, he had worked professionally as a teacher and businessmen, not a writer. In his research for the book, he used his own notes about each game at the new ballpark as well as newspaper articles. He also adds a bit of Giants history, most fitting for a life long fan.

“I took all the photos with my little Sony CyberShot, which captured so many aspects of the ballpark as it was that year,” he said. “There was a big WebVan ad on the outfield wall and an Enron logo on the scoreboard. There was a Sega game center behind centerfield. All are long gone, as is the Pacific Bell name not to mention Who Let the Dogs Out? Woof Woof!”

But thanks to Rob, the memories of that first season at arguably the best ballpark in baseball endure.