Why the San Francisco 49ers are going to win today 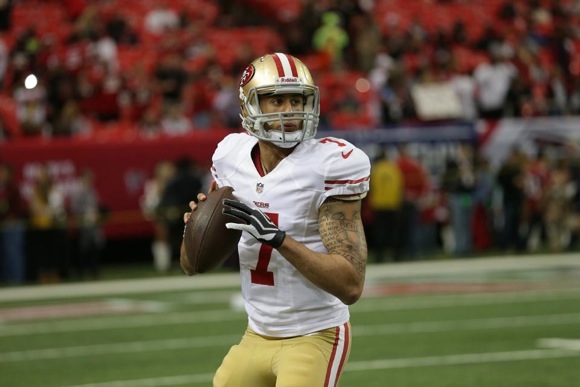 Editor’s note: We thought it wise that the last word on today’s Super Bowl outcome should come from a young pundit. Here’s the prediction — the Niners win! — courtesy of M-A journalism student Connor Woods.

1) Colin Kaepernick:   Kap [pictured above] is one of the best, if not THE best, young quarterbacks in the NFL. He has shown a maturity beyond his years, getting a relatively young team to the Super Bowl in just his 10th start in the NFL. He has proven his ability to play well in the playoffs, setting an NFL record for the most rushing yards by a quarterback in a single game. In my mind, he is just as good, if not better, than RGIII, Andrew Luck, and Russell Wilson, the future superstars of the NFL.

2) Jim Harbaugh:  How Harbaugh has not won Coach of the Year yet is beyond me. He took a pretty pitiful 49ers team and turned them into a Super Bowl contender in his first season. If you look back at his college career, he did the same thing with Stanford, taking the Cardinal from a terrible team to a national powerhouse. He has proven his superb coaching ability, winning an NFC Championship and — will have many more to come.

3) Young Players: The 49ers are stacked with young players, who have exceptional skill in the league. Guys like Frank Gore, LaMIchael James, Michael Crabtree, Vernon Davis, and Delanie Walker, have all proven themselves as impact players in the NFL. The defense is just as loaded, and have become one of the most feared defenses in the league under Harbaugh. To me, all of these players are just as good as the more known, popular superstars of the NFL.

4) Lack of Experience : This might sound like a stupid statement at first, but when you think about it, it makes a lot of sense. Being such a young team, the Niners make their fair share of mistakes on a day to day basis.  But, they are still NFC Champions, and are favorites for the Super Bowl. If they are this good now, imagine what it will be like when they all get a few years under their belt, and get some maturity to go with their skill.

First they have to win! GO NINERS!!!