It’s been four years since Menlo Park residents Debbie Umphreys and Chris Rivera launched Angel Heart Cakes featuring airy, fat-free angel food cakes with a variety of toppings. In 2011, after opening their bakery/retail space in Marsh Manor, they expanded into other desserts like pocket pies, branched into breakfast granola, and introduced munch boxes to send to hungry college students.

They’re growing selection is showcased in desserts they’re preparing for Valentines Day. “When you have ‘heart’ in your name, Valentines Day is really your holiday,” said Chris. 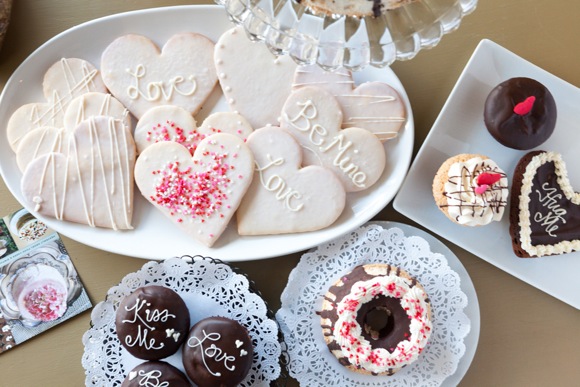 Shoppers can purchased a vanilla angel food cupcake (pictured top) that Chris and Debbie will package up in a special Valentines Day box. They’re also offering heart-shaped sugar cookies and brownies. And, of course, there will have their signature angel food cakes, including a chocolate chip flavor that’s drizzled with ganache and topped with butter cream frosting that has intertwined hearts.

While their retail store is closed on Mondays, Debbie and Chris will be taking orders today via phone and email — (650) 363-2253; angelheartcakes@pacbell.net.

Adds Debbie: “We’ll also be fully-stocked on Feb. 13 and 14 for the party giver or last minute gift buyer.”